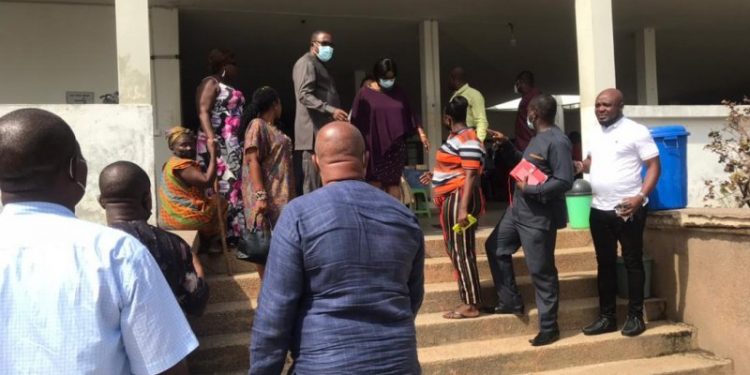 There was no show in court at the trial of the embattled Member of Parliament for Assin North, Hon. James Gyekye Quayson in the suit challenging his citizenship.

This is because Mr. Quayson is yet to be served with the motion filed by his Counsel, Mr. Abraham Amaliba to withdraw his services.

At the last court hearing, the court asked Mr. Amaliba to facilitate the process to serve the first respondent with his motion to allow him to take steps to secure another lawyer to represent him.

However, when the case was called on Tuesday, June 08, Mr. Amaliba explained that the document which was sent via EMS was yet to be received by the first respondent.

Mr. Amaliba’s application to withdraw from the case was based on the argument that he found a comment the Presiding Judge passed during the process to be prejudicial, and that he thought the Judge had already predetermined the case.

The Presiding Judge, Justice Kwasi Boakye, had already overruled the application by Mr. Quayson’s legal team to recuse himself from the case, adding that unless a higher authority orders him to step aside, he would continue the proceedings.

Mr. Amaliba has subsequently petitioned the Chief Justice asking him to change the judge.

A resident of Assin North, Michael Ankomah Nimfah, on January 6, 2021, applied for an interlocutory injunction to restrain Hon. James Gyakye Quayson from being sworn in and holding himself as MP.

His request was granted by the court, but the then MP-elect defied the court orders and went to Parliament to be sworn in as part of the 8th Parliament of the 4th Republic on January 7, 2021.

Therefore, one of the issues to be determined by the court is whether the MP qualified to contest the election at the date he filed his nomination because of the dual citizenship case and whether he still can hold himself as MP after his swearing-in.

Make insurance a part of our culture – Sunu Assurances CEO