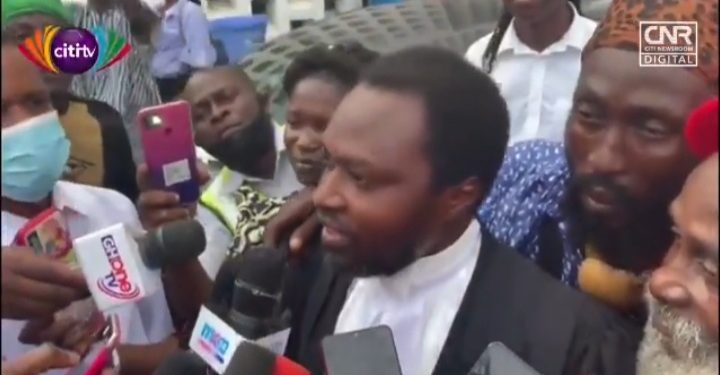 Lawyer for the two rastafarian boys who were denied admission to Achimota School, Wayoe Ghanamannti, has shrugged off fears that the school may appeal to overturn the ruling of the Accra High School that ordered them to admit his clients.

He said the fact that his clients’ right to education has been upheld is victory enough.

Speaking on Eyewitness News, Wayoe Ghanamannti said his team will, however, be ready for any such appeal and will “cross it” if that time comes.

“They have the right to appeal. Our learned friends didn’t indicate any signal of an appeal, but they have a right to do so. Even when they do that, they would have started going to school. And before the appeal will be prepared and put before a court of appeal and the court called upon to get the parties to appear and move the appeal and all that, they would have started school. When we get to that bridge, we will cross it,” he said.

Wayoe Ghanamannti said he is excited about the verdict of the court and praised the judge for upholding the right of the children to education and also ensuring the protection of their dignity.

Justice Gifty Adjei Addo, the presiding judge on Monday, May 31, 2021 disagreed with the submissions of the Attorney General and granted all the reliefs separately sought by the embattled students, except the relief of compensation in the case of Tyrone Marhguy.

Two months ago, both students were refused admission to the school due to their hairstyle which they attributed to their Rastafarian religious belief.

The school’s only consideration to allow the duo entry was for them to cut their dreadlocks which they [students] did not budge, having been placed into the school under the Computerized School Selection and Placement System (CSSPS).

No amount of criticisms by Ghanaians, civil society organizations, and human rights activists against Achimota School compelled it to back down on its decision.

It defended its position saying, allowing deadlocked students was against the school’s rules and regulations.

The parents of the two students sued the school over the matter.

In one of the suits sighted by Citi News, the lawyers argued that their client’s rights were being violated by the school’s actions.

They wanted the court to declare that denying the student, admission because of dreadlocks is “a violation of his right to education guaranteed under Articles 25(1)(b), 28(4) of the 1992 Constitution.”

They also argued that denying them admission is a “violation of the [students] right to dignity”.

The lawyers also wanted “an order directed at [Achimota School] to immediately admit or enrol the applicant to continue with his education unhindered.”

In addition, a compensation for the “inconvenience, embarrassment, waste of time, and violation of the students’ fundamental human rights and freedoms”.

All the reliefs were granted by the court except for the compensation in the case of Tyrone Marhguy.