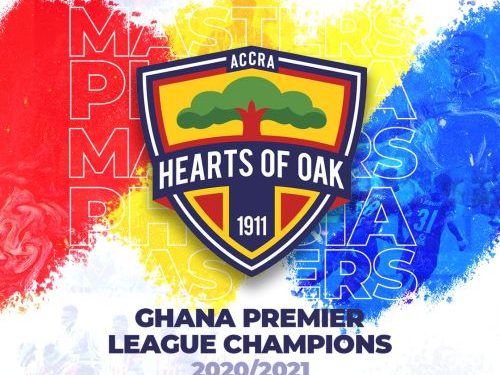 Finally, it rains! After 12 years of trophy-drought, it finally rains in the Capital. For over a decade fans of Accra Heats of Oak had been left disappointed by the repeatedly scant attempt of their club to win the Premier League.

The last time they lifted the trophy, the Phobians swept pass relegation-bound Sporting Mirren at the then Ohene Djan Sports stadium. Then, they had on their hands a young Torric Jebrin. A wizkid who was dazzling his way to stardom. Well, so it seemed. The young prodigy was hot-cake. Not just locally but on the international scene as well. With the likes of Tottenham Hotspurs and Portsmouth among his suitors, his future seemed golden. The aura in the camp of the Phobians was sky high and many thought this was the beginning of something really special. Indeed, as his career nose-dived so did the fate of his boyhood club.

Since then, the plights of Accra Hearts of Oak would worsen. Every season their troubles would compound. They hit rock bottom and would go through a stint of confusion and uncertainty. Poor board room decisions coupled with bad managerial appointments aggravated their woes. Fans continually grew impatient; some would even lose interest completely and hopes of bringing back the glory days appeared a distance away.

Managers will come and go. Some good but others completely disastrous. You can say same for players. At a point it seemed the club had no aim and were content with just participating in the league year in year out.

During this blight and stagnant twelve years, the Accra-based club finished outside the top-4 on 6 separate occasions. Including finishing 13th on the table in 2017/18. Narrowly escaping relegation that year. This was the state of the Mighty Oak Club. The club that was once a continental force. Tearing clubs to shreds used to be a routine job both locally and abroad. One time, the Ghana National team presented an entire XI of which 10 players came from Accra Hearts of Oak in an international fixture against Nigeria. Yes, you heard right. They were that good. Their records and achievements particularly in the early 2000s are stuffs of Legend. Enumerating them will take forever.

Why am I painting a negative picture? Was it all that bad? Well, not quite. On occasions where they showed real promise, they flattered to deceive. In 2015 when they appointed Japanese coach Kenechi Yatsuhashi he had a bright start and went on to lift the mood of the team, things were all cozy. However, just like many before him, his tenure would prove short-lived. As soon as results started to dip, he was shown the exit. Hearts went back to default.

As a fan myself, during the past 12 years I was not spared my own share of the emotional trauma. Well, along the way maybe I lost interest too just like some of the others. My heart was too fragile to be taken on such a horrifying roller coaster ride.

It is not a small feat what the team just achieved. To appreciate it better we need to remind ourselves of the bad days. The lads deserve all the praises and more. What they do not realize is, by this triumph they have earned themselves legendary statuses with Hearts of Oak and their names will forever be etched in the club’s folklore.

Coach Samuel Boadu more so. The Pep Guardiola of Ghana football as he his affectionately called. It is easy to see why when you look at how he earned his stripes. His imperceptible rise to Premier League manager is very much inspiring.

When Kostas Papic, ironically the man who was in the dugout when Hearts last won the league left the club in controversial circumstance. Sceptics were quick to mark that as another blemish in the club’s image, myself included. In came Boadu, who took over from caretaker manager Samuel Nii Noi. Nii Noi did not do bad himself. However, with all due respect to him, the nature of the job at Hearts craved for a more experienced and tactically astute manager. Coach Boadu’s CV ticks the above-mentioned boxes and it came as no surprise when he was handed the job.

But for Anas Armeyaw Anas’ Number 12 exposé on the rot in Ghana football he might as well have already won the Premier League with his previous club Medeama. It is thus, refreshing to see him finally lift it. Even more so when he was handed the manager of the season accolade, very well deserved.

In most successful clubs, it is common to have one individually brilliant player inspire their team to the top. Messi and Ronaldo do it for their respective teams on a regular basis. With this Hearts victory though, it will be difficult for anyone to pin their finger on one particular player and say, `he was the one.’ Even though the likes of Kwadwo Obeng Jnr, Daniel Afriyie, Emmanuel Nettey and Richard Attah were brilliant at various stages of the season. None of them can claim to be the star man who handed the club their first Premier League title in 12 years. At Hearts, the team is the star. Another testament to the good work Boadu and his assistants have done at the club.

Whereas a week ago some football fans in Europe were unsure whether it was coming ‘Home’ or going to ‘Rome.’ In Ghana, it had been clear as daylight for some time now that it was coming to the ‘Capital.’ As fans joined the team to celebrate the coronation of their 21st league title in Sogakope. Be sure to know that the celebration will not die off soon. Not even a 1-0 defeat marred the occasion. It will continue very wildly for days, especially back in Accra. Who can fault them though? It has been long awaited and it is only natural that a joyous elation will greet such a massive feat.

As for the management team and the coaches, attention will soon switch onto how they can best ensure the team’s success in the CAF Champions League qualifying stages and possibly begin plotting a defence strategy for the title next year. Rightfully so, that is what is expected of them.

Same cannot be said for the fans though. They will be sure to bask in the glory of their favourite team. Again, who can fault them? They have the bragging rights over their rivals for a whole year. So, if you are a fan of Accra Hearts of Oak be sure to join in the celebrations. Give it your all, not because you might have to wait another 12 years to see them lift the trophy again. Do so because you deserve it for your patience throughout those difficult times. This is how you have been rewarded.

For, finally, it rains! Why do I keep saying it has rained finally, as if it never did? Well, this time when it did, the rain was sure to leave behind the Rainbow and it colours are shining throughout the Capital and beyond.