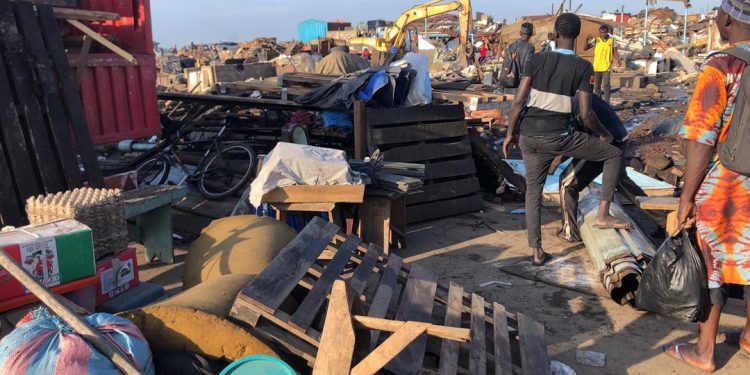 Police supervising the relocation of onion sellers at the Agbogbloshie Market on Thursday, July 1, 2021, had to fire shots to scare away what they said were ‘criminal elements’ who attempted to impede the exercise.

The suspects decided to take advantage of what was meant to be a peaceful exercise to attack some traders.

The timely intervention of the police officers on the grounds saved the situation and helped protect the apprehensive traders.

Some of the suspected criminals have been arrested and are being interrogated.

“[The relocation] has been a planned and peaceful exercise. It went on peacefully without any incident, so there is no need for what we are seeing, but rather some criminal elements wanted to take advantage of the situation to attack the market women at the Dagomba end,” Director of Operations at the Accra Regional Police Command, ACP Kwesi Ofori said, confirming the incident to the media.

He further explained that the police’s action was to ensure the safety of the traders who were relocating.

“The police just intervened to protect everybody. That is what we did. The traders were a bit apprehensive when those criminals jumped in on their end.”

“Some of the criminal elements have been arrested, and they will be interrogated,” ACP Kwesi Ofori added.

Onion traders are expected to begin their business at the Adjen Kotoku Market in the Ga West Municipality from today, Thursday, July 1, 2021, as part of efforts to decongest some areas of the capital city.