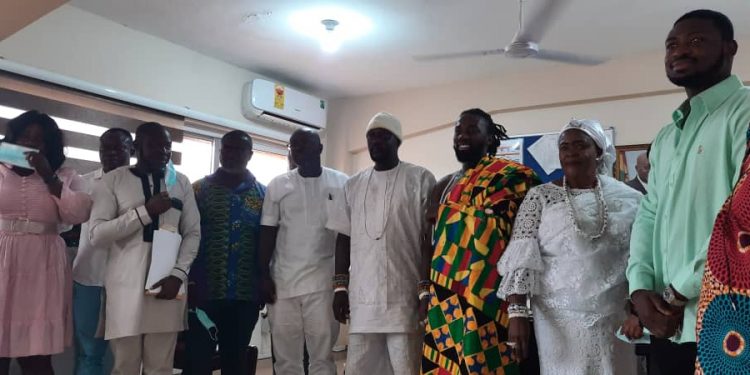 Workers within the Medical Ward of the Pantang Hospital will soon heave a sigh of relief as works to re-roof the structure has commenced.

According to the director of the facility, Dr. Frank Banning, the roof of the forty-bed ward has been leaking for some time and all effort to get it addressed had proved futile.

At an agreement signing event between the financier of the project, US-based entrepreneur, Johnwick Nathan, and management of the hospital, Dr. Banning said the intervention is very timely.

“The facility houses the general medical patients. It used to be a psychiatric ward, which we turned into a general medical ward because we were in so much need of one. Pantang hospital is a very old infrastructure, and it has concrete roofing, so we have gotten to the stage where all the concrete roofing are leaking, and it is affecting the actual structures of the building. When it is fixed, it returns to its old stage after few years. We realized that water was sipping through the roof of ward three, and we needed help to re-roof, but it is expensive to do that, and we don’t have funds. I will say that we have been very fortunate for him to come through for us and we really appreciate it”.

Johnwick Nathan also said there is the need for the project to be completed on time to prevent rain from affecting work in the medical ward.

“Upon seeing the structure I indicated that I will re-roof it and here I am seeing to it that it is done. The contractors have been paid to begin the work. In a bid to maintain the roof to last for a very long time, we have agreed on a warrantee with the contractors. Works have commenced and by August 19, 2021, the roof will be completed. I want this done immediately to prevent staff of the facility from evacuating and been prevented to work when there is a rainstorm”.