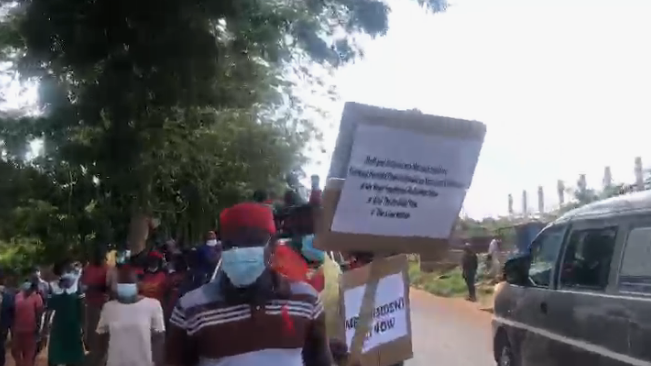 Staff of the Pantang Hospital in Accra who were expected to resume work today [Monday], after a one-week strike, are yet to report to work.

According to them, the government is yet to honour its obligation in the resolution of the impasse.

The various unions of the hospital after a crunch meeting with the Ministry of Health and other stakeholders on Friday, June 2, after a week-long strike.

At the end of the meeting, a Memorandum of Understanding was signed on various conditions agreed by both factions.

As part of the agreement, the workers were to resume work today, Monday, July 5, 2021.

However, when Citi News visited the hospital on Monday, the staff were yet to report.

Addressing the media, the Pantang Local Rep of the Ghana Medical Association (GMA) Dr. Alex Ansah Owusu, said the staff will not fall for the government’s promises.

He said the unions were “ambushed” into singing the MoU.

“We were ambushed with an MoU. We asked them for time to go through and consult our members before we sign, but that was not granted. What was promised us was that after it is signed, we will be given the opportunity to consult members to make changes. Some of our unions signed, and we believe that is what stands,” he said.

Dr. Alex Ansah Owusu added that the unions do not trust the government enough to honour its obligations.

He said the government has already failed to deliver on its promise of  getting police officers stationed at the hospital.

“Why should we trust these people now? Promises have been given and not fulfilled, and that is why we want to see the work done before we resume… The MoU said with immediate effect we will have police men present here at the post, but there was no police post there today. So even with the first item in the MoU, these stakeholders and ministries have not fulfilled their end of the bargain,” he noted.

He said the government must demonstrate full commitment by actualizing its obligations in order to encourage the staff to return to work.

Join our ‘march for justice’ demo – NDC to Ghanaians

Join our 'march for justice' demo - NDC to Ghanaians