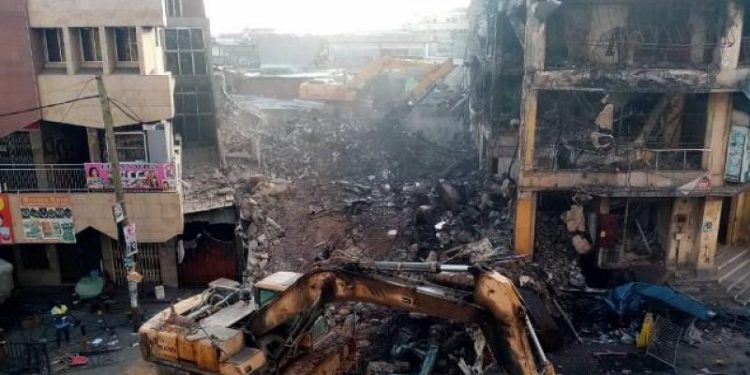 Demolition of the three-storey building which was gutted by fire at the Makola market has started.

The structure is being pulled down, as recommended by a committee tasked by the Accra Metropolitan Assembly (AMA) to investigate the fire incident.

The committee had recommended that the structure in its current state is not fit for purpose, hence must be pulled down and rebuilt.

The demolition, which started on Sunday, August 22, 2021, is expected to last for a few days.

The 48 Engineer Regiment of the Ghana Armed Forces (GAF) is responsible for bringing down the edifice while the AMA task force, the Ghana National Fire Service, the Police, and NADMO are providing assistance to ensure the success of the exercise.

Mr. Gilbert Ankrah, the Head of Public Affairs of Accra Metropolitan Assembly, speaking to the media during the demolition exercise, said the building is expected to be pulled down completely to pave way for the construction of a new one.

He said the exercise could take more than a day because, after the demolition, the debris would be moved in order not to pose a danger to customers.

“I would not be able to know how long the exercise would take, but it would surely take some time,” he stated.

Mr. Ankrah noted that the building was a private property so, after the demolition and clearing, the place would be handed over to the person for redevelopment.

He disclosed that until the demolition and clearing are done, the road would not be opened to traffic.

“Should the GAF be unable to complete the demolition today, the road will not be opened to traffic, but we are hoping that the military would finish pulling down the building today to enable people to continue with their business,” he stated.

Mr. Ankrah said the informal sector plays an important role in the country’s economy, and by extension the development of the city.

He urged shop-owners around the enclave to exercise patience with the Assembly and cooperate with them in whatever activities they undertake to ensure things run successfully.

The three-storey building was gutted by fire on Monday, July 5, 2021, destroying 122 wholesale and retail shops.