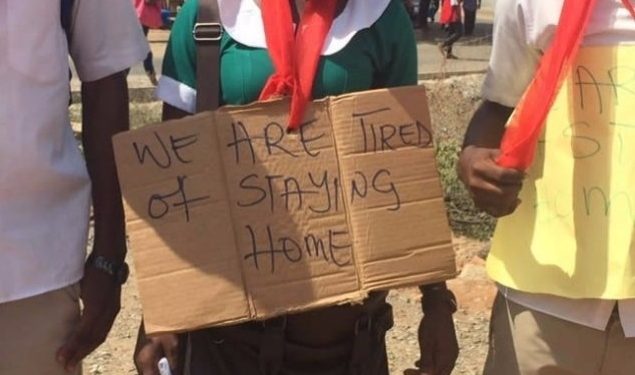 “Every morning in Africa, a gazelle wakes up, it knows it must outrun the fastest lion or it will be killed. Every morning in Africa, a lion wakes up. It knows it must run faster than the slowest gazelle, or it will starve. It doesn’t matter whether you are the lion or a gazelle – when the sun comes up, you should better be running.”― Christopher McDougall

Our nation and its youth are in despair, hopes have been bedridden, the morale of young people have collapsed and crushed, fatigue has strangled any iota of self-perseverance out of the resilient, depression bechanced on a commanding percentage of young people with their tongues held tightly in the mouth out of desperation, and the back of young people are succumbing and breaking due to a load of expectations that is becoming fleeting political rhetoric.

The situation of young people amounts to a human being without a spirit and a captivating football match without the spectacle of fans in the stadium.

President Akufo-Addo has failed to take young people to the historic promised land of biblical Canaan and its effect is a growing despondency that is a ticking time bomb.

We are a country whose young people are in trouble and troubled.

Despite successive governments rolling out countless employment schemes, Ghana is reportedly faced with 12% youth unemployment and more than 50% underemployment, both higher than overall unemployment rates in Sub-Saharan African countries. At the launch of a World Bank report in September 2020, The World Bank’s country director for Ghana, Pierre Frank Laporte remarked that “Ghana’s youth employment challenge is vast and requires an all-round, deliberate, and consistent response,”.

Unequivocally, unemployment remains the biggest threat to our national security. It is a problem that is often swept under the carpet, with empty rhetoric, inflated employment figures, and substandardly packaged temporary employment schemes that pay a pittance to beneficiaries. Unacceptable!

There is a great need to examine initiatives and policies that have been introduced in the name of providing youth employment.

Last week, the charade of a job fair organized by the Youth Employment Agency (YEA) at the Accra International Conference Centre saw thousands of unemployed youths trooping in to present their Curriculum Vitae (CVs) with the hope of getting an opportunity. The Youth Employment Agency (YEA), which had organized this POPULIST job fair with the hope of misleading well-thinking members of society into believing that they were trying to help solve unemployment among the youth rather exposed their ineptitude as their costly and counterproductive ways of organization led to a stampede which left a dozen of young people injured.

It is unbelievable that a youth-oriented state organization such as the YEA, under this government whose Vice President has been touted as the “digital king”, could not find a more innovative way of matching the credentials of job seekers to potential employers but rather had to resort to these risky and archaic ways of doing things. It is obvious as it is like this government to prefer form to substance, hence the needles outdoor gathering for the camera and nothing else.

If the job fair served any purpose, it would be bringing to fore the depressing nature of the unemployment situation in Ghana and also deriding the cooked data on job creation this government pushes out through its dishonest PR infrastructure. It also exposed this government for what it truly is; a more-talk-do-nothing government. Furthermore, the job fair served as a reminder to President Akufo Addo of the respect the state needs to accord its youth by immediately ceasing the deceit of its public relations gimmicks on job creation. Besides these points, the job fair was needles and a wasteful exercise.

The conversation on the job fair can not be exhausted without the mention of the viral video footage from the event which exposed the complete and reckless disregard for social distancing, and other COVID-19 protocols. It was horrendous, to say the least. We must do better in the future.

Weeks before the YEA incident, tens of thousands of young people gathered at the El-Wak stadium and other locations, to be screened for a few hundred recruitment slots into the once-revered Ghana Armed Forces. In the past couple of days, over a hundred thousand young people purchased recruitment forms at 100 Ghana Cedis each, with hopes of getting into any of the security agencies. A non-scientific random sampling of some of these applicants revealed their interest in the security services is primarily because they see it as the most reliable employment opportunity in the country, not necessarily because they have the passion to serve Ghana through the security agencies. For many of these young people, it is a survival mechanism and nothing more. This portends a national security threat.

To put it more bluntly, our beautiful republic is facing an existential threat if we are going to train and weaponize people whose decision to enter these critical services is primarily fueled by their desire to earn their daily bread.

I have a major concern with the fees attached to the recruitment forms. While calling for its total abolishment henceforth, it is only proper to refund those who paid and were not selected. The serenity and dignity attached to our security agencies must be preserved. It must not become a money-making avenue for state actors. It is wrong to extort from these innocent and vulnerable young people. Admittedly, the charging of these fees did not commence under this government, but I believe the time is ripe for this extortionist practice to stop.

Again, the unprecedented surge in the applications for the security agencies further validates the point that unemployment has reached cankerous levels in our country. There is a fierce urgency to address the problem. The youth are increasingly becoming impatient, and justifiably so. We can no longer accept the empty rhetoric from policymakers.

In a viral music video that featured Ghana’s own Shatta Bandle, an award-winning Nigerian artiste, RudeBoy sang about people who fraudulently boast of having money while in reality, are struggling with poverty. He described such monies as audio monies- to wit, only exists in words. This song reminds me of the adage that, when your mother is dead and you pretend she is only sleeping, you are the one who will perceive the odor when it starts smelling.

Since 2017, various employment figures have been bandied about by government officials. Aside from the embarrassing contradictions in these figures, there is a more essential issue of the reality of these jobs.

These are just a few examples of high-ranking members of government, who contradict themselves on the number of jobs they have created.  The bitter truth is that, because these jobs are largely non-existent but politically cooked figures, they forget it so easily.

Nonetheless, assuming without admitting that these figures are even true, what is accounting for the continuous rise in the rate of unemployment, if a significant number as such, were taken out of the unemployed net? There can be only two explanations for such a phenomenon – it is either many more jobs are collapsing or the government is blatantly lying about the creation of these jobs. In our case, the government refutes both scenarios.

In the last 3 decades, we have seen the introduction of about 50 main youth employment programs, including a few led by the private sector but with partnership from the government. However, these programs appear to have had little or no impact because youth unemployment persists, perhaps, manifesting in its worst form today.

Ghana must shift away from this mediocrity, and begin to focus more on creating sustainable jobs for the youth. The People’s Manifesto (NDC 2020 Manifesto), proposed comprehensive measures to create sustainable jobs in the various sectors. That document remains a viable blueprint for the creation of sustainable jobs.

The Government of Ghana has the responsibility to create an adequate number of high-quality, productive, and sustainable jobs that could be filled by the youth.

As a long-term measure, we must realign the focus of our educational curriculum to produce graduates, whose acquired skills and knowledge comes in handy in any productive sector of the economy.

The youth must not settle for these low-paying job schemes from the government – not from this failed NPP government, nor the future NDC government in 2025. We must begin pushing for reforms that lead to the creation of sustainable jobs.

As a Ghanaian youth, it does not matter whether you are the Lion or the gazelle, when day breaks, you must keep running towards a prosperous Ghana.

I lean on the timeless words of the respected Kofi Annan ( the Late) and say that may each tomorrow find our beloved nation progressively further than today in the constant struggle to create decent and sustainable jobs for young people.

Our Generation Cannot Afford to Fail.