The Ghana Police Service has arrested four leaders of the Concerned Youth of Odododiodoo Constituency, who led a street protest on Saturday, September 18, 2021, against President Nana Akufo-Addo’s purported nomination of a former Deputy Greater Accra Regional Minister, Elizabeth Sackey, as the next Mayor of Accra.

According to the police, the protesters were arrested for causing public disorder at Jamestown.

The Police made this known in a press statement.

“The police have arrested four persons for allegedly causing public disorder at Jamestown in Accra.”

“The four are Salaami Abubakari, 36, Daniel Opare Oman, 43, Edward Holm, 38, and Daniel Clottey, 41 years old. The ringleaders led scores of people to allegedly block a road at Jamestown by burning car tyres, further creating a sense of fear and disorder.”

The police also in the statement cautioned other persons with similar intentions to desist or face the law.

“The police administration strongly cautions any individual or group of persons who intend to unlawfully assemble and cause mayhem over the publication of the MMDCEs list or any other matter to immediately abandon such plans or face the law.” 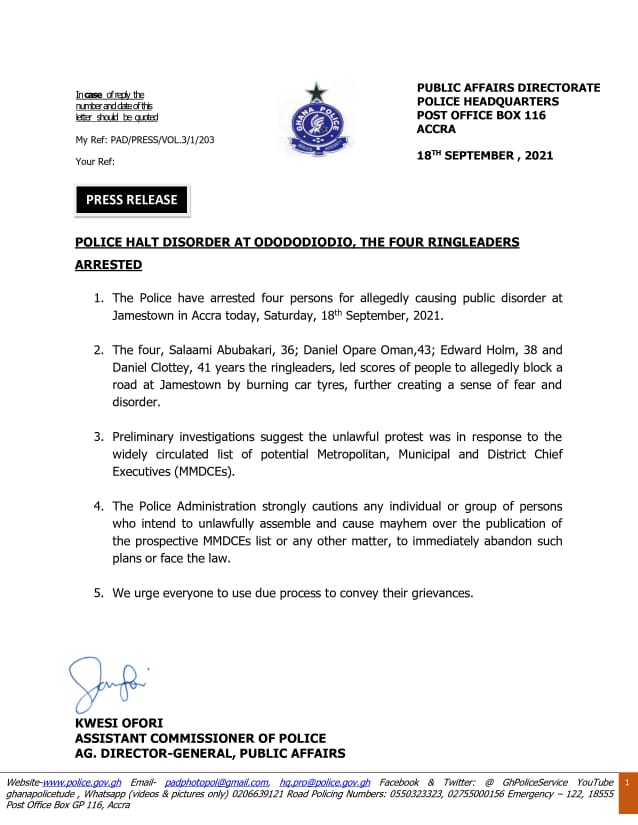 He has since disassociated himself from the incident and urged his supporters to respect the decision of President Akufo-Addo in the nomination of MMDCEs.

In a statement, he declared his support for the yet to be named MMDCE nominees.