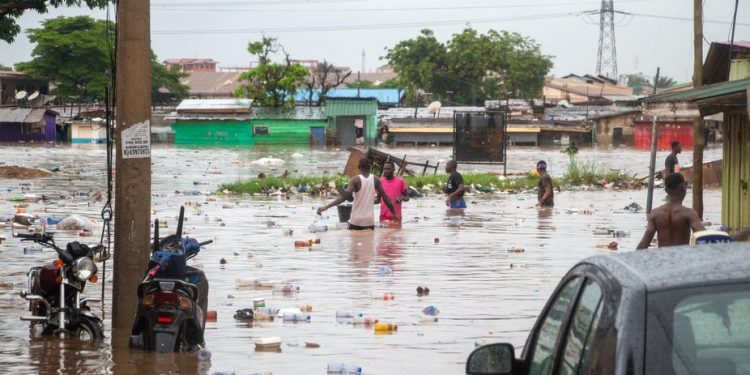 In the last few decades, the metropolis of Ghana’s capital city, Accra, has grown rapidly, sprawling into neighbouring districts.

A recent study found that the built-up area of Accra and the surrounding districts, that make up the Accra city-region, has increased fourfold, from about 105km² to 468km² over the last three decades. To put this pace of growth into perspective, imagine an area the size of nearly 3,000 football pitches being converted from undeveloped land into developed land every year for 30 years.

In about a decade, the city’s population has also more than doubled. In 2010, the population of the metropolis was over 1.6 million, by 2020 the population was estimated to be at about 2.5 million.

In the context of rapid urbanisation, residents face major challenges. These include access to decent and affordable shelter, water and sanitation, perennial flooding and youth unemployment. There’s also growing inequality in relation to access to jobs, education and health.

I’m part of the African Cities Research Consortium, a new six-year initiative committed to addressing critical challenges in 13 cities in sub-Saharan Africa, including Accra. Working with community organisations, local government and agencies, we hope to unlock opportunities that will address complex urban challenges in Africa’s cities.

In our initial study of Accra, we found that the technical solutions needed to address Accra’s urban challenges were known and widely recognised by the government, at all levels. But translating technical solutions into policies, strategies and transformative actions is thwarted by political challenges, as is common in most African countries.

To overcome Accra’s key urban challenges, these political challenges must be addressed.

So what are the key political hurdles?

Though Ghana is regarded as one of the most democratic countries on the African continent, and despite having undergone decades of decentralisation, political power is still very much centralised at the top, within the national government. This hinders local actors when they try to address complex challenges.

For example, the decentralisation law empowers local governments as authorities of development. However, it also imposes certain limits, such as on their ability to raise the substantial capital needed to tackle complex urban problems. This limits the fiscal power of local governments, concentrating it largely in the central government. Thus, while local governments, such as the Accra Metropolitan Area, may better understand their challenges, they may not have the necessary political and fiscal powers to directly address these challenges.

Read more:
Chieftaincy conflicts in Ghana are mixed up with politics: what’s at risk


Second, there’s legal ambiguity surrounding the role of traditional authorities and their relationship with formal state institutions. For instance, the chieftancy institution whose powers derive from customary law is also recognised by the national constitution. This is a political problem that has major implications for urban development across Ghana. For instance, traditional authorities are the custodians of much of the land in Ghana. This makes it hard to address complex problems that are deeply rooted in the prevailing land tenure system.


Third, the mayor of Accra is appointed by the president, not elected by citizens. This raises a number of implications. Mayors are often under enormous pressure from the central government and there is a general perception that they often feel directly accountable to the president and their political parties – not the electorate.

Mayors are also replaced if their party loses national elections, which take place every four years. This means that the political continuity required to sustain local development policies and initiatives may not be guaranteed.

Fourth, any improvement programmes have the potential to become highly politicised. For example, in some instances, community-based arrangements to provide services in low-income communities evolve to become avenues of political mobilisation. They are vehicles for community groups and individuals to become part of and influence city-level politics and power dynamics.

Read more:
Why local solutions are best for urban water supply in Ghana


Fifth, as the capital of Ghana, Accra has high political and economic significance. It’s one of the key deciders of national-level election outcomes. As a consequence, the metropolis’ challenges often become extremely politicised, especially during election seasons.

Debates around what should become of informal settlements or informal public transport operators, strategies to address urban flooding, and water and energy supply challenges, among others, are recycled during election seasons and used by political parties to win votes. This can undermine the commitment to identifying and implementing lasting solutions to complex urban challenges.

Read more:
Why aren’t people in Accra better prepared for floods? The key is in communication


Finally, political short-termism and a lack of continuity of initiatives and projects by successive governments remain major political barriers to addressing some of these major challenges in Accra and other urban areas.

Accra is not unique in its dependency on political power to achieve progress for its residents. It happens in cities all across the world.

Transformative action therefore requires both technical and political actors and citizens working side by side. A key step forward is recognising and understanding the important role politics play in bringing about transformative change at the local level. It is about building alliances involving different stakeholders to identifying and solving the complex priority problems that Accra faces.

A number of on-going initiatives from community-based, self-help organisations and movements could light the way.


We need to go beyond harnessing experience and local knowledge, to look at what has been done, what lessons have been learned already, and what the communities living these challenges every day think about it.

The potential for progress is there.