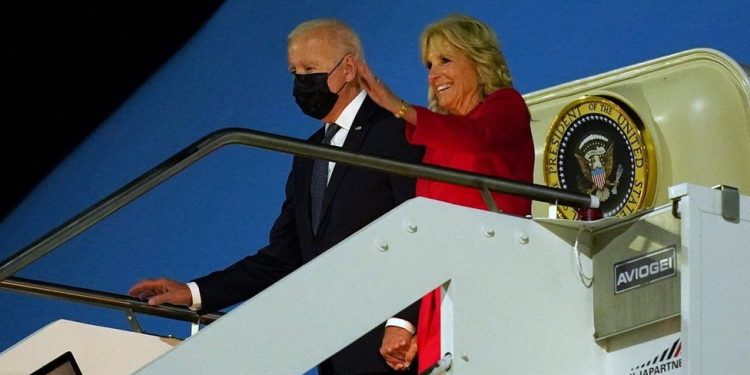 US President Joe Biden has arrived in Europe for two international summits, leaving his $2.75tn (£2tn) domestic agenda in limbo back in Washington.

Mr Biden had hoped to trumpet a bumper environmental package to other world leaders at a UK climate conference.

But his fellow Democrats abandoned plans for a vote on Thursday, leaving his whole platform up in the air.

Mr Biden, whose approval rating has been falling, said his presidency itself was hanging in the balance.

He landed in Rome early on Friday for a G20 summit where plans for a global minimum tax will be on the agenda.

He will then head to Scotland on Sunday night for the United Nations climate conference, COP26, in Glasgow.

Mr Biden will seek to project the message that the US is back in the fight against global warming after his predecessor, Donald Trump, withdrew from the Paris climate accord.

Before leaving the White House for Rome, Mr Biden unveiled a scaled-down spending plan which was the product of months of haggling.

He implored fellow Democrats during a closed-door meeting on Capitol Hill to support his legislative plans, saying he wanted to prove during the two summits that US democracy still works.

“The rest of the world wonders whether we can function,” he was quoted as saying by US media.

But the more liberal members of the party refused to go along with the plans without a guarantee that both spending packages would be voted on in tandem.

Covid-19: All countries to be removed from UK’s travel red list