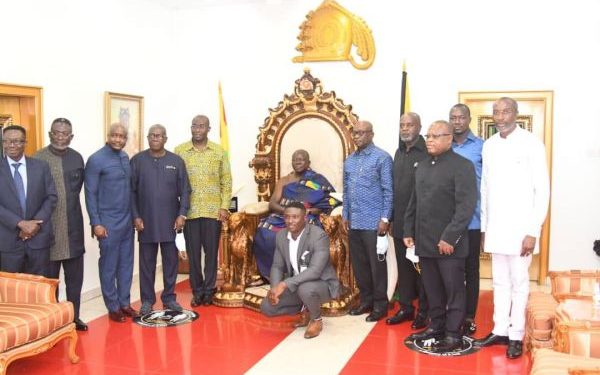 The Asantehene, Otumfuo Osei Tutu II, has advised Exton Cubic Group, owned by Ghanaian businessman, Ibrahim Mahama, to consider re-applying for a concession to mine for bauxite at Nyinahin, in the Ashanti Region.

He said he was aware that Exton Cubic Group had in the past tried unsuccessfully to mine for bauxite at Nyinahin, and that the company should give it a try once again, now that the huge bauxite concession has been divided into three parts.

“Exton Cubic Group should tender for the remaining part of the vast bauxite concession at Nyinahin and if they are able to prove that they have the capacity to operate, then they should be given part of the concession to ensure peace,” he said.

Otumfuo also stressed the need for fairness to prevail in the allocation of concessions to companies to operate at Nyinahin, saying that any company that has the capacity to operate should not be discriminated against by the authorities.

The Asantehene was speaking when the management of Rocksure International, the firm that had been awarded part of the concession at Nyinahin to mine for Bauxite, paid a courtesy call on him at the Manhyia Palace in Kumasi.

The historic visit was, among other things, intended to give the leadership of Rocksure International the opportunity to officially inform Otumfuo and Asanteman about their readiness to mine for bauxite at Nyinahin.

The Asantehene said Rocksure International was selected to mine for bauxite at Nyinahin after the company had gone through the laid down procedure and beaten stiff competition from 38 other equally competent companies.

“In all, 39 companies put in a tender for a concession to operate at Nyinahin and Rocksure International, which was one of the bidders, emerged tops,” he said, adding that, “Exton Cubic did not put in a bid, and they should do so now”.