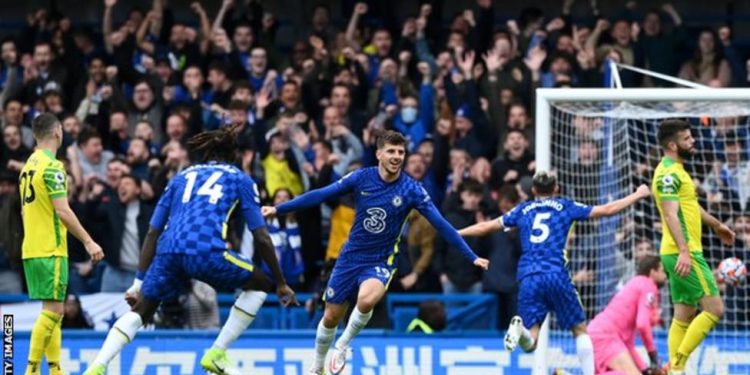 Thomas Tuchel’s side were 2-0 ahead inside 18 minutes as Mount and Callum Hudson-Odoi scored their first goals of the season, with Mount turning provider to set up Reece James for a third goal before half-time.

Fellow defender Ben Chilwell scored for the fourth successive game to extend Chelsea’s lead shortly after the restart, before Max Aarons’ own goal and Mount’s late double wrapped up the win.

Canaries defender Ben Gibson was sent off for two yellow cards to cap a miserable afternoon for the away side, who remain rooted to the bottom of the table and without a win this season.

With Lukaku and Werner ruled out with injuries suffered against Malmo in midweek, Tuchel played Kai Havertz as a false nine with Mount and Hudson-Odoi either side, and together they formed a mobile front three that regularly outmanoeuvred a labouring Norwich defence.

The Canaries’ lack of pressing afforded the Blues players far too much time on the ball and they ruthlessly took advantage, with the London club unlikely to have a more comfortable afternoon this season.

Norwich’s failure to close Mount down gave the England midfielder time and space to score the opener from the edge of the box after just seven minutes, while Kovacic and Mount were able to set up Hudson-Odoi and James respectively to effectively end the game as a contest before the break.

Substitute Milot Rashica had an effort saved by goalkeeper Edouard Mendy as Norwich briefly threatened to get back into the game at the start of the second half, but the rest of match turned into a procession.

Their afternoon was summed up by the sight of manager Daniel Farke with his hands outstretched on the touchline in utter bemusement at his side’s defending after Chilwell scored Chelsea’s fourth.

Hudson-Odoi’s cross then deflected off Aarons and crept under Krul for an unfortunate own goal, before Gibson was rightly shown a second yellow card minutes later for a clumsy challenge on James.

Krul managed to save Mount’s late penalty but VAR spotted he had strayed off his line, with Mount scoring the re-taken kick.

Blues substitute Ruben Loftus-Cheek beat the offside trap to tee up Mount for his hat-trick in stoppage time.

It was a fitting performance for Chelsea as they paid tribute to former vice-chairman Matthew Harding, who died in a helicopter crash as he flew home from a game at Bolton 25 years ago in 1996.

It was also a poignant day Norwich, who wore T-shirts during the warm-up in support of team-mate Dan Barden following his diagnosis with testicular cancer.