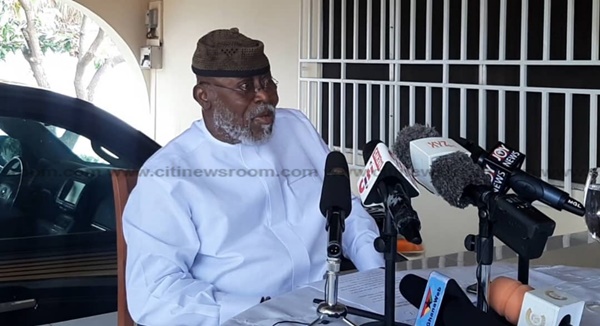 He cited the use of NPP’s vigilante groups and the prevention of some assembly members from voting as the basis of his accusations.

His comments come on the back of the just-ended MMDCEs confirmation elections, some of which were marred by violence and perceived manipulation.

There were places where journalists were prevented from observing and covering the voting process.

Speaking at a press conference at his residence in Accra, Dr. Tamakloe said the happenings were simply unfortunate.

“The experience of violence where the Presiding Member of the Assembly was assaulted, and the Achiase District, was not exempted from this bloody act. An assembly member of this district was also assaulted during the confirmation of the DCE nominee for that District. Ghana as a country cannot continue like this under this NPP government led by Nana Akufo-Addo. This indicates how unpopular and disappointing the people of this country are against the undemocratic moves of this government. Many of these actions happened in areas where the old nominees were reappointed for the second term.”

Dr. Tamakloe further indicated that these incidents that characterized the election must not go unpunished.

He described the process as unconstitutional and called on the speaker of Parliament, the IGP, and the government to immediately investigate the incidents.

“Most reasons given by the assembly members for rejecting the nominees is lack of development in their localities. Lack of good human relations on the part of the DCEs and many other reasons. The Chief Executives are indeed suffering from the deeds of their appointees, who have starved the assemblies of their Common Funds for four quarters and introducing the capping system to take part of the money meant for the development of their localities.”

“I call on the government, the Ghana Police Service led by the IGP, and the Parliament of Ghana to as a matter of urgency effect investigations into these happenings in various assemblies in order to bring the perpetrators of these undemocratic actions to book”, the NPP stalwart added.