Passengers walk from Accra to Achimota over ‘heavy’ traffic congestion 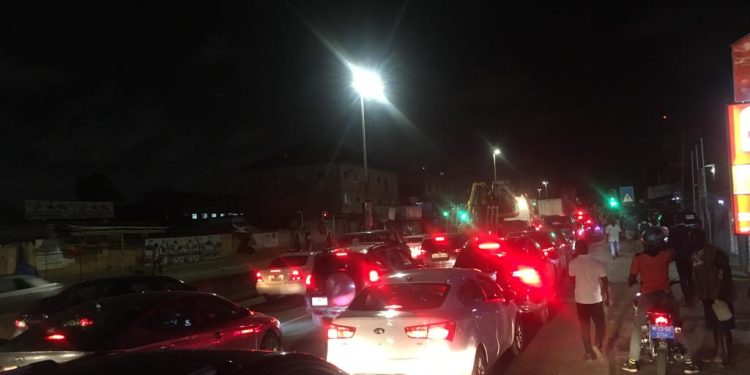 Some commuters who use the Kwame Nkrumah Interchange as a transit point to Achimota, Abeka, Lapaz, Ofankor, Amasaman among other places were compelled to trek to their various destinations on Monday evening, October 11, 2021, following a massive gridlock on the stretch.

The situation which some drivers described as “terrible” started around 5:00 pm as road commuters spent several hours in traffic.

When Citi News‘ Fred Duhoe used a motorbike to assess the situation, he observed that a lot of passengers were stranded as there was no end in sight.

Some passengers alighted from commercial vehicles and decided to walk to their homes and other destinations.

Some of them who spoke to Citi News said, “we walked from Tudu in Accra, and we are heading towards Achimota and Ofankor because that was the best option under the circumstance”.

Vehicles stood at one place for several minutes before moving at a snail pace to cover a distance of about 20 meters at a time.

Other link roads at Avenor, Kokomlemle and surroundings were affected by the gridlock.

Some passengers also blamed the situation on Christmas, which is about ten weeks away.

According to some passengers, commercial motorbikes popularly known as “okada” were charging GH¢100 from the Kwame Nkrumah interchange to Pokuase and GH¢70 from Accra to Achimota.

This they say was too “expensive”.

A police officer, General Constable Martin Akpade, from the Central Police MTTD, who was at post at the Caprice traffic intersection, said “the traffic situation was quite serious. I understand there’s an accident around Achimota and that is why the situation is like this”.

Another ‘trotro’ driver said, “we used 1 hour 17 minutes from the Kwame Nkrumah Circle to Caprice”.

In effect, they used that time to cover a distance of about a kilometre, which ordinarily should be less than 10 minutes on any ordinary day.

The Ghana Police Service had earlier announced that a road crash involving a single six-axle fuel tanker at the Nsawam bypass had led to a roadblock on the Accra-Kumasi Highway.

The Service indicated that the Accra-Kumasi bound traffic had been diverted onto the Kumasi-Accra bound lane as a result of the accident.