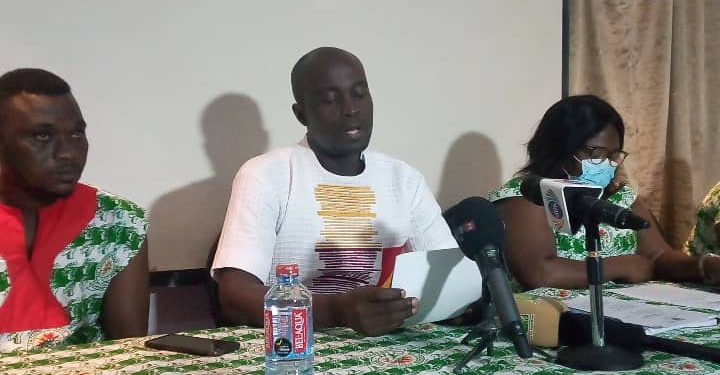 Two teacher unions have kicked against the government’s ‘one teacher, one laptop’ policy, citing a lack of transparency and quality.

Teachers will be expected to bear 30 percent of the cost, while the government pays 70 percent for the laptops that will be provided by KA Technologies.

But at a press briefing, Stephen Ayensu, the Founder of the Innovative Teachers Alliance, insisted that “it is the responsibility of employers to provide the tools needed by teachers to work.”

The groups are also worried that “the price of the laptops keeps changing like a chameleon.”

“With reference to GES Press release dated 9th September, 2021 the price of the laptop was GHS 1,831 and its 30% was GHS 549. GES letter dated 26th October quoted GHS 509 as the price for the 30% component. What was the actual amount negotiated before KA Technologies started executing the contract?”.

“What was the actual amount executed before KA Technologies started executing the contract,” they asked further.

The policy has also been criticised for a lack of transparency by the Deputy Ranking Member on Parliament’s Education Committee, Dr. Clement Apaak.

Dr. Apaak was concerned that the government has been unable to provide clear explanations on the total cost of the laptops and the number of beneficiary teachers.

In addition to transparency concerns, Mr. Ayensu questioned the quality of the laptops.

He described them as substandard and said they could not be used effectively to teach.

According to him, teachers feel insulted that the government has resorted to “a local company with no track records in manufacturing laptops after the RLG debacle.”

“Since the laptops were substandard, almost all of them [RLG laptops], broke down within a short time,” Mr. Ayensu added, reminding of the government’s distribution of RLG laptops.

“One would have thought that the Ministry of Education ought to have learned lessons from the RLG fiasco and not repeat the same with K.A Technologies Ghana Limited. It has become obvious that the Ministry of Education will continuously insult teachers with laptops of suspicious quality which break down within a short time, resulting in huge financial loss to the state. The so-called laptops are like notepads. We can’t use it for anything”.

In 2010, RLG was contracted by the government to manufacture and distribute over 100,000 laptops to schools across the country.