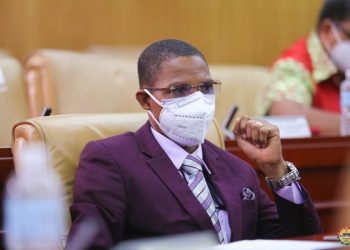 The Member of Parliament for Madina, Francis-Xavier Sosu, is hopeful the tussle between him and the police over his involvement in a demonstration in his constituency against deplorable roads will be settled amicably.

The MP has been absent from two court hearings, where the police have accused him of roadblocks and alleged destruction of public property during the protest he led.

The MP, who has since sued the law enforcement agency for allegedly trampling on his rights to protest, says the case is affecting his work as a legislator.

“I think it’s a bit disruptive, and I’m hoping that sooner or later we will go past that. I never expected it to come this far, and I don’t really expect it to get to some level.”

“I hope that we will be able to resolve the matter going forward. “

He posited that he doesn’t believe in “simply turning yourself into the police if you haven’t committed any offense. I believe I followed due process with regard to the demonstration.”

“There was no complaint of any sort. The issues started escalating when everything was over, and I was about to go to Parliament and the Police tried arresting me. That was when the hiccup started. I cited them for contempt of Parliament, and out of anger they decided to retaliate by coming to church to get me arrested.”

“It is for this reason I resorted to the Human Rights Court to protect my fundamental human rights. I am hoping that it will resolve the issue,” he added.

Mr. Sosu led some of his constituents in a demonstration against bad roads on October 25, which the police contend included some unlawful acts, hence the attempt to arrest the MP.

The MP said police even manhandled him on the day of the protest, and had reported two police officers to Parliament.

There were also police officers present at a church service to arrest the MP, although the police have denied that they were there to arrest him.

The police eventually secured a criminal summons for Mr. Sosu to appear in court on November 8, 2021.