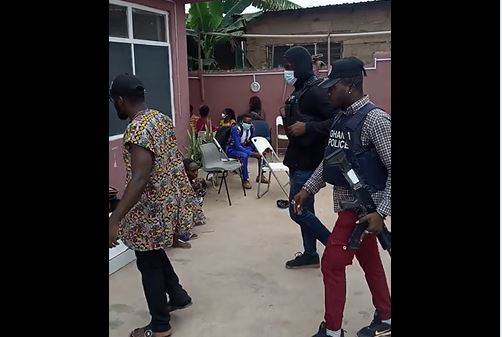 Ten suspects have been rounded up at a hotel in Abeka-Lapaz following an undercover operation by officials of the Ghana National Fire Service.

The suspects are said to be behind a fake fire service recruitment ring using the image of the Ghana National Fire Service to defraud people under the pretext of securing them jobs in the Service.

The Intelligence Unit of the Ghana National Fire Service supported by armed plain-cloth police officers arrested the gang at the hotel on Friday, January 14, 2022.

At the time of the arrest, they had mobilized over 100 prospective applicants who had paid various sums of monies with the hope of getting them into the Fire Service.

According to the Fire Service, the suspects have been sent to the Police Headquarters for further interrogation and investigation.

The Public Relations Officer of the Ghana National Fire Service Timothy Afum urged the public not to fall prey to fraudsters that claim to offer jobs in the fire service.

“My advise to the general public especially the youth who are looking for jobs is that, it is better to keep your money than you wasting it for people to enjoy when you will still not get the job. If you want the job, just go through the right procedures then you will be secured, but if you go and pay huge sums of money and at the end of it, someone squanders your money, then what is the use…Let’s be cautions so we don’t fall prey to such characters,” he said.

The Ghana National Fire Service’s recruitment process started in the last quarter of 2021 with thousands of young people thronging the National Fire Academy and Training School in a bid to go through the screening and verification process.

There was gridlock in front of the academy stretching beyond its frontage as a result of the number of applicants and their relatives, some of whom trooped to the Academy as early as 3:00 am.

Though the situation has been under control, the applicants appealed for a smoother process.