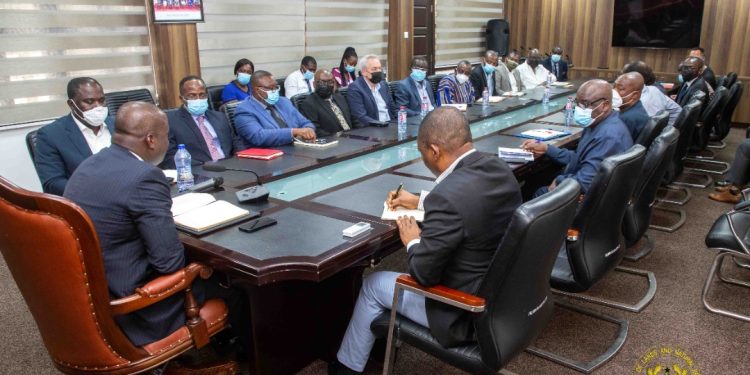 The government through the Ministry of Lands and Natural Resources has launched the Appiate Support Fund.

The fund will among other things provide relief items to persons affected by the explosion which occurred last Thursday, 20th January 2022 at Appiatse in the Prestea Huni-Valley Municipality of the Western Region.

At the launch in Accra on Tuesday, the Sector Minister, Samuel Abdulai Jinapor, said the establishment of this Fund will also help in the reconstruction of the entire community.

He subsequently called on Ghanaians to support this worthy course.

“Ghanaians have been known to be hospitable and compassionate, and we cannot ignore our own people who fell victim to this unfortunate event. On the instruction of the President, the Ministry of Lands and Natural Resources has decided on the “Appiate Support Fund to raise funds to among other things support the people and reconstruct the community brought down by the explosion”, Samuel Jinapor said.

To ensure fair, transparent, and judicious use of the funds, the government has appointed a five-member committee to manage the funds.

The committee has been tasked to raise sufficient funds and supervise the disbursement of the funds in accordance with the highest level of integrity for the sole benefit of the people of Appiate.

Meanwhile, the Chairperson of the committee, Former CEO of the Ghana Chamber of Mines, Dr. Joyce Aryee, said they will use their diverse expertise to help realize the objective of the fund.

The Fund, which is aimed at soliciting support from individuals, corporate institutions, and well-meaning Ghanaians, will also be managed with supervision from the Ministry of Lands and Natural Resources.

The explosion has killed at least 14 people and wounded more than 100 others as well as leveling several buildings in the area.