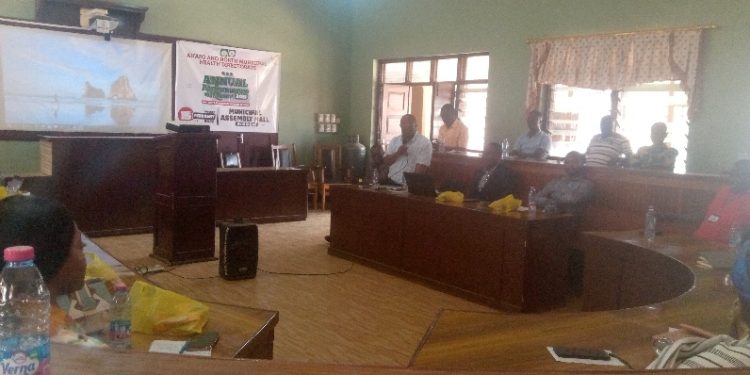 The Ahafo Ano North Municipality in the Ashanti Region last year recorded zero cases of maternal deaths across all its health facilities.

According to the Municipal Director of Health Services (MDHS) Mr. Joseph Adomako, not only did the municipality record zero maternal mortality, but the same can be said of neonatal death.

He maintained also that, all the children that were delivered at all its 16 health facilities in the Municipality survived with their mothers.

Mr. Adomako however cautioned that not recording any maternal death at any of the facilities does not mean there was no maternal death in the municipality.

“Some might have occurred in the communities without the health system being notified,” he said.

Again, the municipality recorded zero cases of Cholera as well as COVID-19 related deaths. Another milestone for the health sector in the municipality was the 100 per cent tuberculosis success rate recorded last year.

The above was made known during the Annual Health Performance Review Meeting held at Tepa, the capital of the Municipality. The meeting that brought all the stakeholders in the health sector together, provided a platform to review and discuss health issues in the municipality.

Addressing the meeting, the Municipal Director of Health Services, applauded all the health workers in the Ahafo Ano North Municipality for their dedication to duty. He was impressed with their work done last year and mentioned that the performance of the health workers last year was an improvement over previous years and hoped to achieve more this year.

Among the innovations that the directorate is bringing on board this year according to the Director, are the creation of wellness centres at some strategic locations that can easily be accessible to the public in the municipality; commercialization of the physiotherapy unit of the Municipal Hospital where the public can easily register, pay a token and patronize; as well as putting in strategies to properly track and record all tuberculosis (TB) cases in the Municipality.

The creation of the wellness centres has already started with the first station at the Tepa Market, something the ISD can confirm.

The wellness centre is mostly a point of contact where members of the public can access, for health professionals to check their vitals and offer advice accordingly without administration of drugs.

The Director, citing the Adansi North District success story told the gathering about the reactivated screening system that has been adopted. The reactivated screening system is basically a set of questionnaires at the consulting room administered to every client that visits the health facility. This system has helped the district according to the Health Director to detect much more TB cases within the population.

During the meeting, the MDHS stated that the Manfo Health Centre has been selected as the Model health centre for the Ahafo Ano North Municipality.

The model health centre according to the Health Director is a new programme by the Director-General of the Ghana Health Service to improve accessibility and quality of care at the periphery.

Among the major challenges discussed at the meeting was the issue of the doctor to population ratio. It was revealed that the municipality with a population of over 150,000, has only two medical doctors at the Municipal hospital. It is against this drop that stakeholders have made a passionate appeal for more doctors to be posted to the area.

At the end of the meeting, the Municipal Health Directorate presented awards and citations to some individuals as well as facilities that excelled during the year under review.

The programme was attended by the members of the traditional council, Assembly Members, health workers, NGOs as well as Members of the Ahafo Ano North Municipal Assembly.