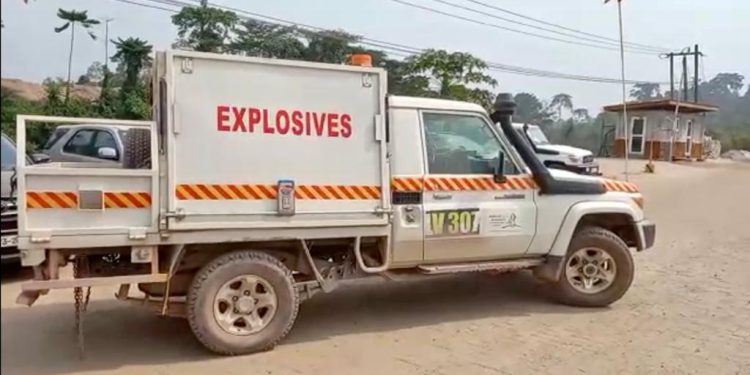 In case you haven’t heard, on Thursday, 20th January 2022, a large explosion occurred along the Tarkwa-Bogoso Ayamfuri road after a truck transporting mining explosives reportedly collided with a motorcycle. The explosion levelled an entire village nearby. As of the day of writing this article, 13 people had been confirmed dead, and an additional 59 people have been injured.

It is reported that the truck was transporting explosives to the Chirano gold mine, which was about 140 km (87 miles) from the scene of the blast, when it was hit by a motorcycle. This allegedly caused a fire, leading to the explosion about 15 minutes later.

You are at liberty to add some more you discover. However, this discussion will focus on the law which, in my opinion, provides the most practical guidelines specific to the use of explosives, i.e. the Minerals and Mining (Explosives) Regulations, 2012 (LI 2177).

The LI applies to anyone that uses explosives for any kind of work, except the Police or Military. The law does not apply to explosives, fireworks, a coloured flare, a percussion cap, rocket or other similar devices used by the Ghana Ports and Harbour (GPHA), Aviation and Railway Authorities.

In order to place this discussion in its proper context, each of the items regulated by the LI is explained below.

Explosives have been defined by the LI to include devices like dynamite, black powder, pellet powders, initiating explosives, blasting caps, safety fuse, fuse lighters, fuse igniters, squibs, cordeau detonant fuse, instantaneous
fuse, igniter cords and igniters. An explosive can also be any other chemical compound or
mixture that functions primarily by explosion, which involves instantaneous release of gas and heat. Therefore, once the device, chemical compound or device operates by an explosion that releases gas and heat, it is explosive.

Most of us have a fair idea of what fireworks are: those things that sometimes sound like a gun has gone off and usually produce beautiful coloured lights in the sky. The Ga’s aptly call it “tun t3” (sound of a gun). For the more studious readers, the Merriam-Webster Dictionary defines a firework as “a device for producing a striking display by the combustion of explosive or flammable compositions.”

A flare is a “fire or blaze of light used especially to signal, illuminate, or attract attention.” A coloured flare may be used for various reasons. For instance, a coloured flare can be used as a distress signal (which are usually red in colour). There are examples of coloured flares used as a gender reveals during baby showers as well.

Percussion Cap
Percussion caps are basically firearm ignition devices. As the description suggests, they are used to igniting firearms, which undoubtedly can be harmful if not used correctly. Indeed, even where it is used correctly but for the wrong reasons, it can still case considerable harm or damage to life and property.

LI 2177 does not define what a rocket is. However, a simple Google search can provide some clarity. According to NASA, the word “rocket” can mean different things: a tall, thin, round vehicle that launches into space, a type of engine or a vehicle that uses that engine. It is said that fireworks are the simplest of solid rockets and the weakest. A soda bottle rocket science experiment is a rocket. Therefore, this is discussion is as relevant to the science teacher at a JHS who encourages the creation of a lab-based rocket as it is to the multimillion-dollar mining company operating in Ghana.

The most important thing to note here is that each of the devices described above are restricted to use by the GPHA, Aviation and Railway Authorities, Police and Military only. Therefore, the LI applies to any other person who uses, a firework, percussion cap, coloured flare, rocket or other similar devices. This means the neighbourhood gangs who use fireworks during Christmas or other holidays are required to comply with this law. Equally, the galamsey operator and the licenced mining companies are required to comply with LI 2177 with the
same level of seriousness.

Evidently, the LI applies to the mining contractor that attempted to transport the explosives that led to the Bogoso explosion.

 The holder of the mineral licence must ensure that any activity (including the conveyance, storage, possession, manufacture and use of explosives) that involves explosive substances are:
1. managed by a certified explosives manager;
2. carried out only by competent and certified persons; and
3. carried out only if the licences and permits required are in place.

 Prior to the commencement of any operation involving explosives in Ghana, the holder of a mineral right must submit an Explosives Operating Plan detailing the proposed activities to be conducted to the Chief Inspector of Mines for approval and issuance of that entity’s explosives operating licence.

 The explosives operating licence must be renewed annually and the holder of the licence must notify the Chief Inspector of Mines of any significant change in the operation plan prior to the implementation of the plan.

Some Legal Issues arising from the Explosion

As part of the application for an operating licence for transportation of explosives, the applicant must include an emergency response plan.

In the case of the Bogoso explosion, it is not clear whether there was an emergency response plan in place at all and if there were, its implementation leaves much to be desired.

3. Monitoring: interestingly, the law requires the Chief Inspector to thoroughly examine each installation and equipment in a place where explosives are stored, transported, manufactured or used and issue a certificate if the Chief Inspector is satisfied with the result of the inspection. A permit must be obtained from the Minerals Commission each and every time explosives are to be transported. The relevant questions are:

(a) Was an inspection conducted prior to the transport of the explosives?
(b) Was a certificate issued?
(c) How do we ensure that on the basis of the terms of the certificate, the
transportation was carried out in a safe manner?

As is human nature, where there are no sanctions or consequences for actions, we barely obey the rules. So in case you were wondering, there are clear sanctions for breaching any of the legal requirements discussed above ranging from fines to imprisonment. To folks who use fireworks or any explosive contrary to the LI, you can actually go to prison for four (4) years or pay a fine of about GHS12,000 or both.

On a more serious note, no amount of punishment can compensate for the loss of lives in this unfortunate incident. One life lost is one too many. My condolences to the injured and to the families of the deceased. May God keep us all.

Naa Ayeley Komey is a lawyer at AB & David specializing in the areas of Energy, Infrastructure and Public Private Partnerships; Government Business and Legislation; Corporate and Intellectual Property. She also holds a Master’s Degree in International Business Management from the Robert Gordon University, Aberdeen, UK.

The views expressed in this article are solely the opinion of the author and not AB & David’s.