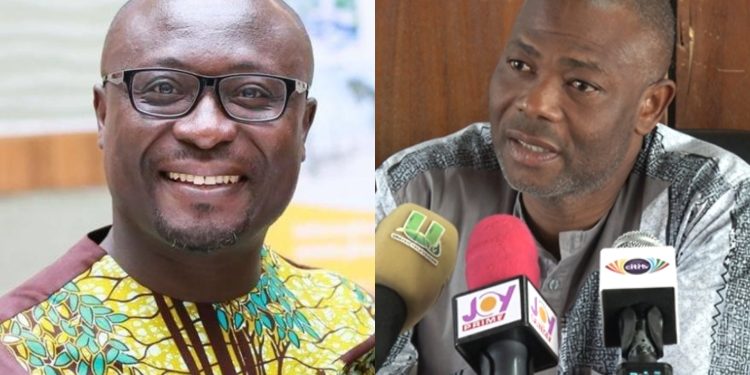 Ghana Music Alliance, a group of music professionals who are dedicated to structuring systems in the music industry, has raised a number of concerns regarding certain statements made by Abraham Adjatey, the Chief Operations Officer of Ghana Music Rights Organisation (GHAMRO).

In a press release sighted by ghanaweekend.com, Ghana Music Alliance highlights some false claims that were reportedly made by CEO of GHAMRO during a recent Twitter Spaces hosted by Muse Africa.

According to them, Abraham Adjatey made some claims against the Norwegian Copyright Development Association (NORCODE), GHUD Music in his submissions.

Mark Darlington Osae, the Chairman for Ghana Music Alliance, stated in the release that at a previous press conference held by GHAMRO some months ago, Mr. Adjatey stated that NORCODE introduced GHAMRO to Heaven 11 as a potential back-office solution provider. In his statement, he further iterated that Heaven 11 had demanded an amount of $55,000 for their services when rendered.

“Ireland-based Heaven 11’s aim is to streamline copyrights administration, licensing, and royalty distribution, resulting in increased revenues for all parties. According to Mr. Abraham Adjatey, NORCODE intended to set up a service agreement between Heaven 11 and GHAMRO. He repeated these same sentiments during the Twitter Space last week,” he wrote.

He further noted that during the VGMA Music Summit in June, 2021, Xavier Seven, President of the Ghana Music Alliance, publicly challenged GHAMRO’s leadership about peddling falsehoods and misleading rights holders. He mentioned QISIMAH, GHUD Music, NORCODE amongst others as entities that had tried to work with GHAMRO and rhetorically asked what happened to them. He added that the video ruffled some feathers within the Ghanaian creative arts space. Some top creative industry stakeholders expressed their discontent about his public outburst, probably oblivious of what the facts were.

“In recent developments, we can confirm that NORCODE was always very open in their dealings with GHAMRO and have documents to back this assertion. In this regard, we also uncovered that NORCODE sent a draft MOU which set details of the entire project to GHAMRO, regarding their CMO-in-a-Box (CIB) project which they intended to promote as a collaborative project with GHAMRO. The draft MOU was sent to GHAMRO in January 2020, but GHAMRO never responded,” he noted.

Mark stated that from their investigations, “although NORCODE accepts that they introduced GHAMRO to Heaven 11, they made it absolutely clear that they did not make a GHAMRO- Heaven 11 relationship mandatory as part of their CIB project. In fact, the CIB was developed as an extension of the WIPO Connect back-office solution.”

Ghana Music Alliance, therefore, avers that NORCODE has commented that Mr. Abraham Adjetey’s assertion that a fee of $55,000 was demanded for Heaven 11’s services was incorrect.

“NORCODE points out that Heaven 11 had in fact agreed to accept an annual fee in the much lower amount proposed by Mr Adjatey himself, in his email, dated 15th March 2020, to Vladimir Philippov (the founder of Heaven 11). (There is a passing sotto voce confirmation of this in Mr. Abraham’s very statement.) The service agreement document prepared by NORCODE for GHAMRO was only intended to protect the interest and data of GHAMRO, particularly its metadata. Again, adoption of the service agreement was offered to GHAMRO merely as an option and was NOT a mandatory part of the project,” the statement says.

The Chairman of the Alliance also mentioned that NORCODE subsequently officially responded to Mr. Abraham Adjatey and copied to Rex Omar (GHAMRO Board Chairman), to clarify any misrepresentations on the part of Mr. Adjatey.

“NORCODE states they so acted because it was anxious to preserve its standing and neutrality as a foreign aid organisation in Ghana so that it can continue to contribute effectively to the well-being of all creators in the Ghanaian music industry and their legitimate representatives,” Mark stated.

In the recent Twitter Spaces, Mr. Adjatey in an answer to a question about why GHAMRO had not been able to work with local companies like QISIMAH & GHUD Music providing some solutions (radio monitoring), stated that the companies did not have the capacity to provide the services required by GHAMRO.

However, this comment has been refuted by one of the companies GHUD Music in a ‘Notice To The Public’ on 1st August, 2022, stating that; “After years of discussion, GHAMRO never concluded on engaging our services, despite all our efforts to fulfil their needs. Any statement or rhetoric intimating a lack of capacity is disingenuous and an affront to our brand. We would appreciate it if Mr. Adjetey or anyone from GHAMRO desists from making any further false statements about our brand in the future”.

This follows similar responses from the Chief Technology Officer (CTO) of QISIMAH, Appier-Sign over the last few months, refuting and challenging allegations by Mr. Adjatey about the inadequacy of their monitoring system. According to Appier-Sign, Mr. Abraham Adjatey has just been making excuses for GHAMRO not contracting his company for reasons best known to them. He asks that the public ignore such claims.

Finally, Mark Darlington reiterated the group’s commitment to making sure the music industry is put on the right course.

“These developments further re-affirm our resolve to continue to challenge poor practices within Ghana’s music ‘industry’, to educate, and to inform practitioners about music rights management in Ghana. The Ghana Music Alliance remains determined and committed to championing the cause of rights holders and musicians in Ghana,” he concluded.