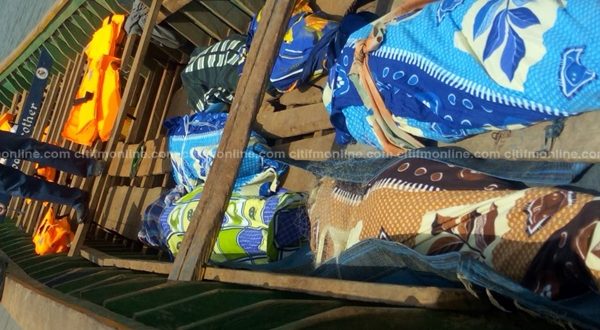 A pregnant woman and five others including two children, traveling in a canoe on the Volta Lake, lost their lives at Donkokrom in the Afram Plains District of the Eastern Region, when the canoe capsized.

The Saturday, February 17 incident occurred when the canoe from Dwarf Inland Foekope to Bruben near Donkokrom, capsized after a windstorm, drowning six occupants on-board.

“On February 17th at about 8:18pm, Richmond Amponsah of H/No. D48, Donkorkrom, came to the charge office and reported that at about 5:47 one Akoli Afetsi was in charge of an outboard motor canoe with nine passengers on board from Foekope, Dwarf Island to Bruben near Donkorkrom. That on reaching a section of the Volta Lake, there was a storm and the boat capsized resulting into the death of Victoria Akoto aged 69, Rebecca Same aged 46, Vena Akpaglo aged 42 a pregnant woman, Patience Afete aged 28,  Kekeli Akpaglo aged 2 and Stanley Dakatsey who is 1-year 4months old”.

Asp Ebenezer Tetteh indicated that the bodies have since been deposited at the morgue as police continue their investigations.

“Bodies of the victims have been retrieved and deposited at the Donkokrom Presbyterian Hospital morgue for autopsy, while police continue with investigations into the unfortunate incident”.

“I will use this opportunity to express our condolence to the families who have lost their relatives and advice canoe owners and operators to pay attention to the changes in the weather and also make provision for life jackets”.

In August 2016, nine people, including a pregnant woman, drowned when the boat they were travelling in capsized on the Dakar river in the Northern Region.

Also in June 2016, 15 people, including at least six children, died in a boat disaster on the Volta Lake.

This followed another in May, where about fifteen people were rescued in an accident involving a ferry heading towards Yeji. In January that same year, one person died while hundreds were rescued in February in two different accidents.

2 pregnant women, 7 others drown in boat disaster on River Oti

This accident comes after a similar one in February this year. Two pregnant women and seven others died after the canoe in which they were travelling on the Oti River capsized.

The deceased were part of 11 passengers on-board the canoe returning from a church service in Mawuvi Kofe to Dzagbeshi Kofe; all satellite communities in the Krachi East Municipality of Volta Region.