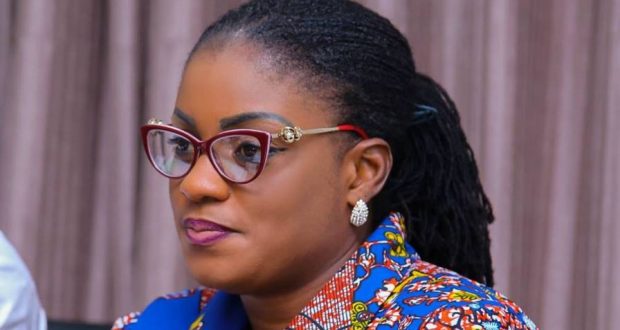 Deputy Information Minister, Nana Ama Dokua Asiamah Adjei has refuted the assertion from the Minority in Parliament that the government’s inability to create jobs is responsible for the recent upsurge in robberies.

Mrs. Asiamah-Adjei argued that criminal tendencies were influenced more by upbringing and morality and than by desperation from joblessness.

“How jobless could you be that it would push you to get into armed robbery?” she questioned on Eyewitness News after the Minority stated that there was an inextricable link between jobless New Patriotic Party vigilante youth and the increase in robberies.

Vice President Dr. Bawumia admitted the current unemployment levels were a “national security issue”, stating at the 69th Annual New Year School and Conference at the University of Ghana that “it is a national security issue because the devil finds work for idle hands. Ultimately the high level of unemployment is a reflection of the underlined weaknesses in our economy.”

A security analyst, Professor Vladmir Antwi Danso recently noted to Citi News that “if there is the chance for indulging in anything unconstitutional they [unemplyed people] will do it because they have to survive and that is how you look at it when security is concerned.”

Though Mrs. Asiamah-Adjei admitted that there were currently not enough jobs to absorb all the unemployed youth, she insisted that no amount of desperation could push one to robbery.

“Day after day, there are new policies and directives which give different opportunities to other people but if you are not born a thief, I don’t know what kind of hunger that will push you to get into armed robbery. If you do not desire to get into anything like that, what kind of hardship would push you into this? So this is neither here nor there.”

She added that it would be presumptuous to say that unemployment was causing the cause of the escalated insecurity when some robberies are suspected to be aided by insiders.

“We have lots of people with good morals. The fact that people may not have and the opportunity to be employed yet does not mean we should push all these negative issues that are happening on them. It is neither here nor there. We cannot just sit down and assume that it is only because some are unemployed. There are others who may be gainfully employed working all these institutions, for instance, the banks. What about those who work in these institutions who are the ones who give tip-offs? Aren’t they employed?”

“I am saying good morals and however we were brought, the kinds of friends we have are what will influence the robberies more than unemployment,” Mrs. Asiamah-Adjei stated.