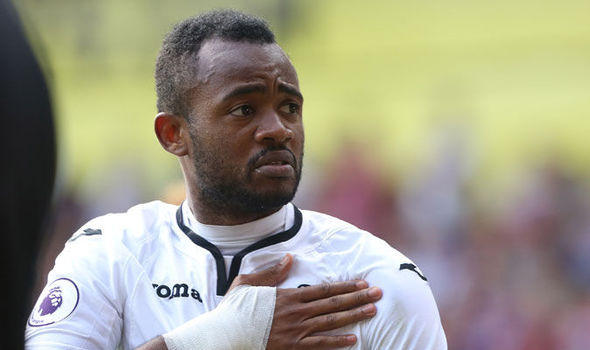 Ghana’s Jordan Ayew believes that Swansea City have the quality to help them retain their Premier League status at the end of the season.

Swansea City are currently 17th on the Premier League table on 33 points with three matches left.

Of the three, two are against two (Southampton and Stoke City) of their direct opponents in the hunt for survival and the Swans need to get victories in order to beat the drop.

Ayew, who has seven league goals so far, is certain that he and his team-mates can steer clear of danger in the final weeks of the season.

“This season has not been easy. We are still struggling but we need to keep going. We are going to keep fighting and hopefully, we get to stay in the Premier League. I am sure we will stay because we deserve it,” he said during Swansea City’s End of Season Awards night on Wednesday.

The former Aston Villa, Marseille and Sochaux man was named Players’ Player of the Year in addition to the Best Goal and the Top Scorer Awards and he thanked his colleagues for their support.

“This award means a lot to me and I would like to thank the rest of the playing body. If it were for them, I would not win this trophy.

I would like to thank the club as well because since the first day I walked in, they have been good to me. The only thing I can do in return is to give my 100 percent and that is what I try to do on the pitch.”

Ayew is expected to be part of the Swansea team that faces Bournemouth on Saturday May 5 in the Premier League.