The office of Former President John Mahama has dismissed a petition made to the Special Prosecutor by some citizens alleging Mr Mahama diverted some $13 million meant for the development of Western Region when he was vice president.

It added that the claims were “absurd”.

“The above is obviously another false and dubious claim. Furthermore, the said petition is another orchestrated but failed attempt by the NPP Government to divert attention from the numerous corruption scandals suffocating it.”

The basis of the petition is a 2016 article written by the current Special Prosecutor, Martin Amidu.

“The said article alleged that former President John Dramani diverted $13M to private pockets when he served as Vice President,” the petitioners noted.

The funds were said to have come from the E.O. Group, as part of its corporate social responsibility.

As a condition for then-President John Atta Mills giving executive consent to permit the E.O. Group to assign $300 million worth of shares to Tullow, the E.O. Group agreed to pay $13million to the Government for the development of the Western Region.

It was described as its corporate social responsibility.

Martin Amidu, in his 2016 article, was urging Ghanaians to vote out John Mahama’s National Democratic Congress ahead of the 2016 elections.

He cited a number of alleged corrupt acts, including the diversion of the $13 million.

Mockery of a special prosecutor

The statement said the fact that these allegations emanated from Martin Amidu compromises the office of the Special Prosecutor.

“It actually makes a mockery of the Special Prosecutor that the surrogates of the NPP will cite as their evidence, an article they say was written by him. This is a man who during his public vetting before parliament said the allegations he made against various people over the years, were based on perception.” 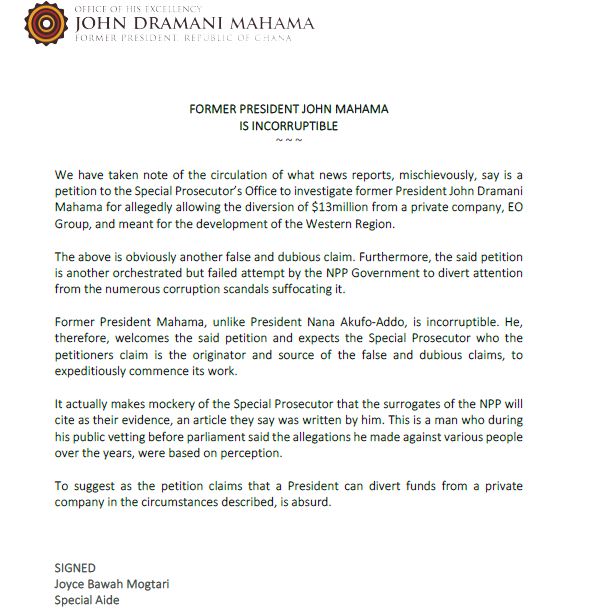