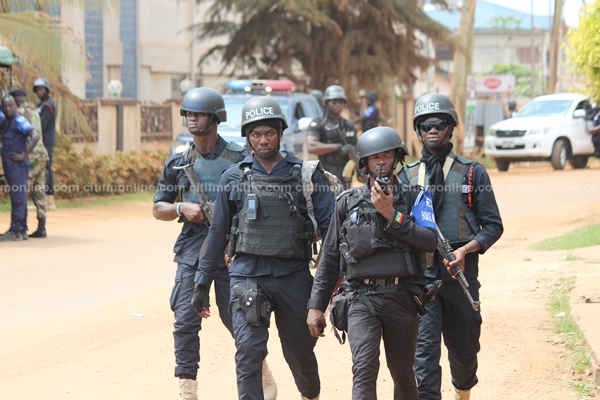 There was confusion at Ashaiman in the Greater Accra when aggrieved commercial motorbike operators popularly known as Okada, clashed with some police personnel in the area on Tuesday.

The irate motor riders numbering over two hundred stormed the Ashaiman Divisional Police headquarters to protest the arrest of some of their colleagues and the seizure of their motorbikes.

[contextly_sidebar id=”r90TPU6iNR1R7s6vtTP5u5Ypmef7i1LB”]The group used stones and other offensive weapons resulting in the damage of police property.

The Unit commander of the Ashaiman Divisional MTTD, DSP Isaac Kumi Forson told Citi News the rioters would be brought to book.

“We called on opinion leaders, but we got no response, so we resulted to calling on Special Weapon and Tactics (SWAT) for reinforcement but they [Okada riders] are still not cooperating, so if persuasion fails, force must be applied, so we decided to use tear gas, and they retaliated by throwing  big stones into our compound,” he said.

In August 2017, some commercial motorbike transport operators popularly  besieged the Aveyime Police station after two of the riders died in an accident in their attempt to run from the police in a chase.

The distressed riders burnt car tyres in front of the police station and tried to force their way into the station to demand justice for the dead riders.

Although the business by law is illegal as motorbikes aren’t permitted to be used for commercial purposes, the law had been breached blatantly across the country.

The police looked on whiles it escalated only for them to be fighting it now.

Roads to be closed for Amissah-Arthur’s funeral