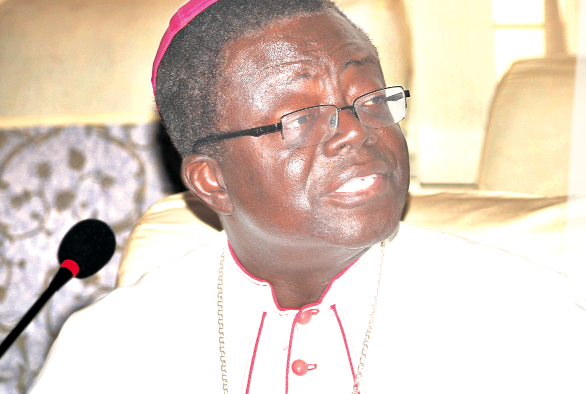 The immediate past President of the Catholic Bishops Conference, Rev Joseph Osei Bonsu has backed the Ghana Revenue Authority’s (GRA) decision to tax the business activities of churches.

The GRA has indicated that plans are advanced to tax the business activities of churches in the country.

[contextly_sidebar id=”4GMGrNXytWVT8o7r1xY05iNk42lwlSlD”] Commissioner of the Authority, Kofi Nti, said the plan is to block revenue losses.

According to him, tithes and offerings will not fall under the category being considered.

To this effect, the GRA has promised to pay informants 25 percent of any penalty against churches which are caught involved in money making ventures clandestinely.

But, in a Citi News interview, Rev Osei-Bonsu said the move was laudable.

“So if a church has a factory or provides transport services then of course that is doing business and that one should be taxed. But the normal collection we take in the church for the revenue of the church; that one should not be taxed.”

Meanwhile, Rev. Osei Bonsu, who is also the Catholic Bishop of the Konongo Mampong Diocese, has welcomed calls by the Christian Council of Ghana for a regulatory body to standardize activities of churches in the country.

“If we want government to come out with a rule for controlling the churches, what probably can be done is for the various religious bodies such as the Christian Council of Ghana, constitute a body that can look after religious affairs. Certainly if people break rules in the course of church services…there are rules that are broken, criminal acts… such a body can ensure that these things are not done.”

He added that the involvement of some churches in financial misappropriations, could have been averted if there was a religious body mandated to check those acts.

President Akufo-Addo has said that the recent activities of churches in the country could result in taxation of the Church.

He said the Church, which was known for its charity and projects in education, health, and other social interventions is shifting into the sphere of prosperity.

Speaking at the 2018 Synod of the Global Evangelical Church in Accra, Akufo-Addo said the path of modern Christianity appears to justify calls for the Church to be taxed.

“There are increasing calls for churches to be taxed, it is not difficult to see what is driving these calls, for years, and the churches are seen to be leading the drive for development, they built and run schools and hospitals, they led the campaign for sanitation,” Nana Akufo-Addo said.

“It is not surprising that there are calls for taxes to be imposed on church income, when you step out of the charity man, out of education, out of healthcare; you are putting yourself in the line of the tax sphere,” he added.