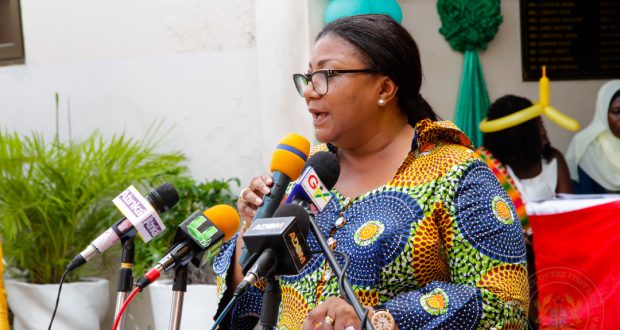 First Lady, Mrs. Rebecca Akufo-Addo, has called for education and skills development programmes to empower young girls and women to enable them engage in income-generating activities.

This, she said, would make girls and women better informed to make decisions about their sexuality, saying “being empowered will help women and adolescents make wise choices to help them ‘stay’ free from HIV.”

Speaking in New York at a programme organised by the Organisation of African First Ladies Against HIV and AIDS (OAFLA), Mrs. Akufo-Addo said “more importantly, to ensure that mothers and children remain free of HIV and AIDS, adolescents, especially, girls and vulnerable women must have access to sexual and reproductive healthcare services”.

The OAFLA meeting held on the sidelines of the 73rd UN General Assembly discussed the “Free to Shine” campaign which was launched in January this year in Addis Ababa, Ethiopia.

The programme brought together development agencies, foundation partners and the private sector, with an objective to network with the first ladies for future support and programmes.

OAFLA and the African Union lead the ‘Free to Shine’ campaign, and it reinforces the political commitment of African nations with a vision to end childhood AIDS in Africa by 2030 as well as keep mothers healthy.

The goal of the campaign was to raise awareness of the HIV epidemic in children, and the need to prioritize children and mothers, to ensure that successes achieved in reducing infections are extended to the vulnerable group.

The campaign is also aimed at increasing understanding of how to prevent HIV and AIDS in children by keeping mothers healthy, preventing mother-to-child transmission and ensuring fast and effective identification and treatment of HIV infected children among others.

Statistics said of all adults newly infected with HIV in sub-Saharan Africa, one in four is an adolescent girl or a young woman in their reproductive years.

In Ghana, according to the 2016 HIV Sentinel Survey report, the National HIV Prevalence among pregnant women attending antenatal clinic was 2.4 percent.

Mrs. Akufo-Addo said research indicates that there are 300 new HIV infections daily worldwide, and this includes infections among women, adolescents, and youth.

She said there is “the need to do things differently if we are to have an HIV-free generation.

Mrs. Akufo-Addo said the ‘Free to Shine’ campaign is a timely initiative to ensure that children are born free and live free of HIV while making sure that mothers are also healthy.

“As the Premier Ambassador for the elimination of HIV and AIDS, and being passionate about the well-being of mothers and children, the ‘Free to Shine Campaign’ provides the space for me to address both issues effectively”, she said.

Mrs. Akufo-Addo said to accelerate the pace and extent of ensuring that new infections are reduced by 80 per cent by the year 2020 in the country, “we have put in place policies and interventions that will constitute the game changer”.

She said some of the interventions include the endorsement and continued implementation of the Joint United Nations Programme on HIV and AIDS (UNAIDS) 90-90-90 aspirational treatment targets to be attained in 2020.