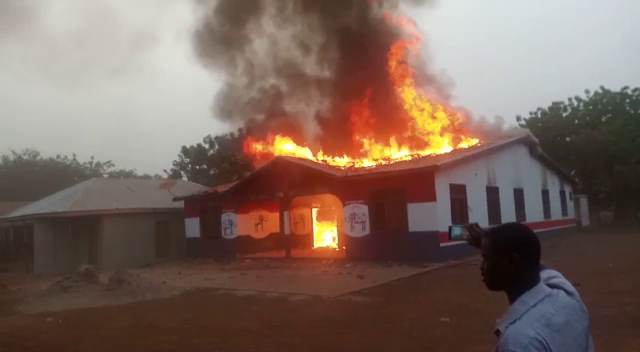 The seven suspects who were arrested in Salaga on Wednesday, February 13 in connection with violence in the area following the announcement of Damango as capital for the Savannah region have been granted bail.

The youth, who were flown to the police headquarters in Accra from the Savannah region were flown back to the region around noon on Friday, February 15, 2019.

It is unclear what the conditions for the bail terms are but Citi News gathers that the suspects have since reunited with their families.

The seven young people were part of a number of irate youth who destroyed properties and also burnt down the New Patriotic Party’s (NPP) constituency office on Tuesday night after President Akufo-Addo announced Damango as capital for the newly created Savannah region.

According to the residents, they were expecting Salaga to be named as capital for the new region.

They also alleged that they had been promised by President Akufo-Addo that Salaga will be capital of the new region.

They said the promise was the basis upon which they went out to massively vote in last December’s referendum to endorse the creation of the new region and feel betrayed by the government’s decision not to name the area as capital.

But the government condemned the action of the youth and called on the police to make them face the law.