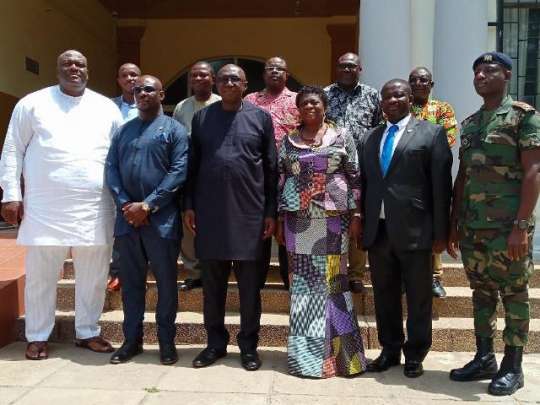 On June 3, 2015, the country experienced a major disaster, which resulted in the loss of many lives and property.

The incident was as a result of heavy torrential rainfall, which started in the late hours of Tuesday 2nd June and continued into June 3, 2015, leading to severe flooding in several parts of the country and Accra being the worst affected.

[contextly_sidebar id=”ojk7Wt4cTSzidH83U7sE2IvIBCNYAVmS”]The flood waters resulted in the loss of several lives and destruction of property worth thousands of cedis.

The seven-member Committee is under the Chairmanship of Mr Seji Saji, the Deputy Director-General in-charge of Technical and Reforms at the National Disaster Management Organisation (NADMO).

[contextly_sidebar id=”KnY5AK67xpOHdcJI4B4mogr9zpS4dwvN”]Mr Dery said NADMO together with the other security agencies evacuated the injured persons for medical attention and the dead to the mortuaries of the 37 Military Hospital, Police Hospital, Korle-Bu Teaching Hospital and the Ridge Hospital.

He said the Government responded through NADMO by providing support for the victims of both the flood and the fire incidents.

Mr Dery noted that the 160 fatalities and 65 victims with various degrees of burn/injury needed special care.

He said out of the total number of deaths, only 110 were identified and claimed by families for burial.

He said the Government supported 96 out of the 110 bereaved families with an amount of GH¢10, 000.00 each towards the burial and funeral rites.

The Minister said the remaining 14 families were not compensated due to uncertainties surrounding their next of kin.

“As we speak, some of the injured are still visiting the medical facilities and treating their injuries at their own expense, which has made life very difficult for them,” he said.

“In view of all the happenings since June 3, 2015, especially to the victims and their families, the Government of Benin donated an amount of $200,000 to support the victims,” he added.

Mr Dery charged the Committee to disburse all monies raised to the victims and to disburse the Benin Government’s $200,000 support fund too.

“I believe the Committee will discharge its duties with diligence to bring relief to the victims of the 3rd June twin disaster,” he said.

“Fortunately, most of the surviving victims have constituted themselves into groups, which can be reached easily and NADMO had their contacts as well. This should help the Committee do its work without much difficulties,” he added.

He urged the Committee to ensure transparency in the execution of its mandate.