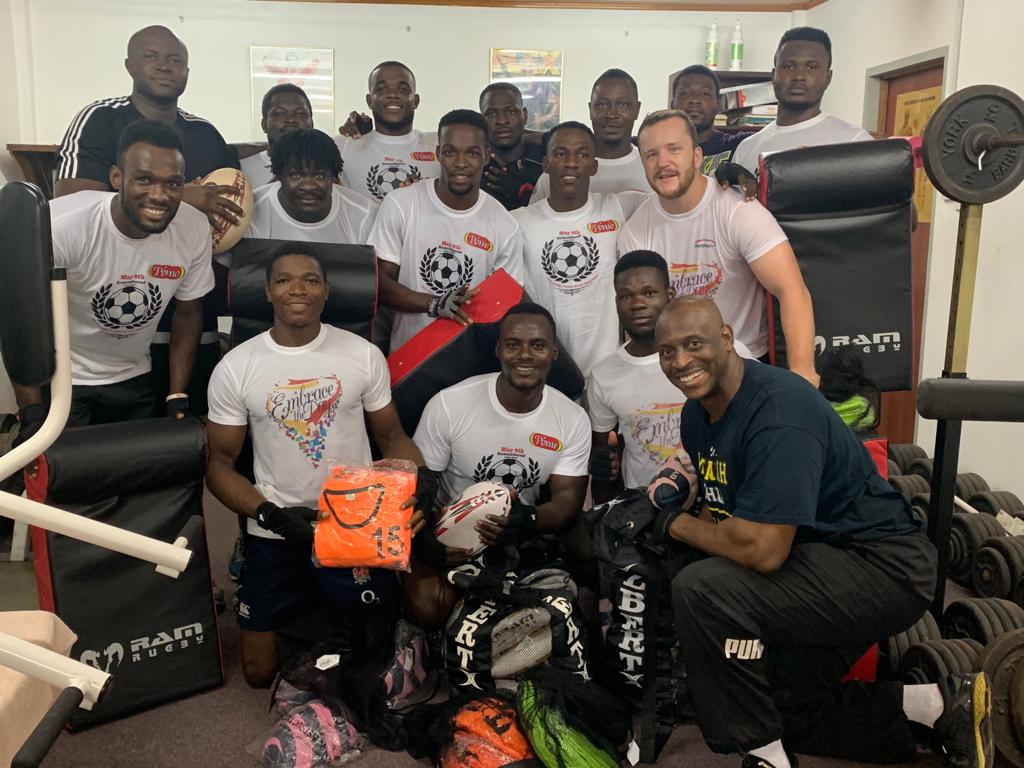 Ghana Rugby has received support from some Friends of Ghana Rugby in the UK in the form of kit and equipment.

Mr. Osborne said “The kit which you received was donated by a friend of mine, Julian Ayton of J A Consultancy (UK) LTD. Julian was the kit man (Kit Logistics Technician) at Harlequins FC when I was coaching there. He has always had a genuine passion for the development of the game and the grassroots of the game, not just the elite end. Julian had supported a number of initiatives in the past including the Future Hope Charity based in Calcutta, which uses rugby as a platform to improve the life chances of street children in that city. So when I told Julian about what I was doing in Ghana, he was genuinely interested to assist, and so he donated a load of kit for the programmes run by Ghana Rugby.”

“He will be delighted to know that it has arrived and that his contribution will make a significant impact on the development of rugby in Ghana.”

Mr. Herbert Mensah, President of Ghana Rugby, said that the Union is extremely grateful for the kind donation and that the Union can do with many more of such initiatives.

“Given our development plans and objectives, we can never receive too many balls, bibs and cones and the donation by Julian Ayton via Collin will go a far way towards supporting our World Rugby ‘Get Into Rugby’ (GIR) Programme, Mensah said.

Ghana Rugby also received 80 rugby balls at the recent 13th Rugby Africa Summit in Marrakech, that was donated by Gilbert, an official sponsor of both World Rugby and Rugby Africa.

Ghana Rugby is the official full member of both World Rugby (2017) and Rugby Africa in Ghana-West Africa, and is responsible for the management and development of the Game Rugby Union in the country.

The Union is governed by a Constitution and administers five KPAs (Key Performance Areas) namely, Youth Development & Growth through the World Rugby ‘Get Into Rugby’ Programme, Women in Ghana Rugby, Training & Education, Domestic Competitions and International Performance.
–
By: citinewsroom.com|Ghana