Fire service condemns attack on its men at Asamankese 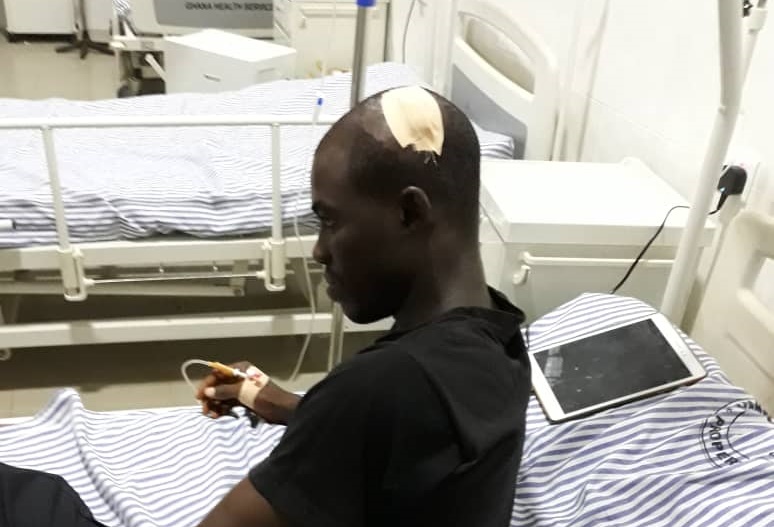 One of the firemen attacked by residents

The National Fire Service has condemned the attack on its personnel who were called to duty at Asamankese in the Lower West Akim Municipality of the Eastern Region when fire gutted three shops in the area.

Angry residents pelted stones at the Kade fire tender breaking its windscreen for arriving late at a fire scene after a distress call.

The firemen had to take cover at the Asamankese Divisional Police Command for close to five hours for fear of their lives.

[contextly_sidebar id=”i1Y1CanFYIJ2oJi2nHpmChHddmdjuLrv”]The residents were angered over the inability of the Asamankese fire department to respond to the call and blocked major roads in the area to vent their anger after dousing the fire themselves.

Assistant Divisional Officer Grade II Ignatius.K. Baidoo in an interview with Citi News condemned the attack on the fire officers and called on the public to exercise patience.

“At 18:15 hours, we received information at the regional headquarters that there has been a fire outbreak at the Asamankese market. Unfortunately, that day the fire tender at the Asamankese fire station had been booked out of commission due to a mechanical fault it had developed of which immediate steps had been taken to work on it. Mechanics were working on it the day of the fire”.

“This act from the public is very unfortunate because the fire service is a sensitive institution and our equipment and logistics must be preserved and maintained. But in this case, the public are the ones perpetuating these attacks which are very disheartening. We are here to serve the public and it’s because of them that we are working”.

Ignatius Baidoo further narrated that, “the firemen had to take shelter at the Asamankese police station because it became serious and intense to the extent that the police had to come to our help and the Kade fire officers were locked at the police station up to 22:30 hours so the men did not get the opportunity to fight the fire.”

Assistant Divisional Officer also called on the public to exercise patience in dealing with fire officers.

“Our appeal to the general public is that when such incidents occur, we want them to exercise patience because they may not be aware of the circumstances regarding the delay. It is because of the public the fire service has been established to take care of and we will not take efforts to delay to attend to any fire. We need support from the general public to help us fight the fire and save lives but not to attack us.”

Nana Addo urges politicians to be forthright when touting achievements

Nana Addo urges politicians to be forthright when touting achievements