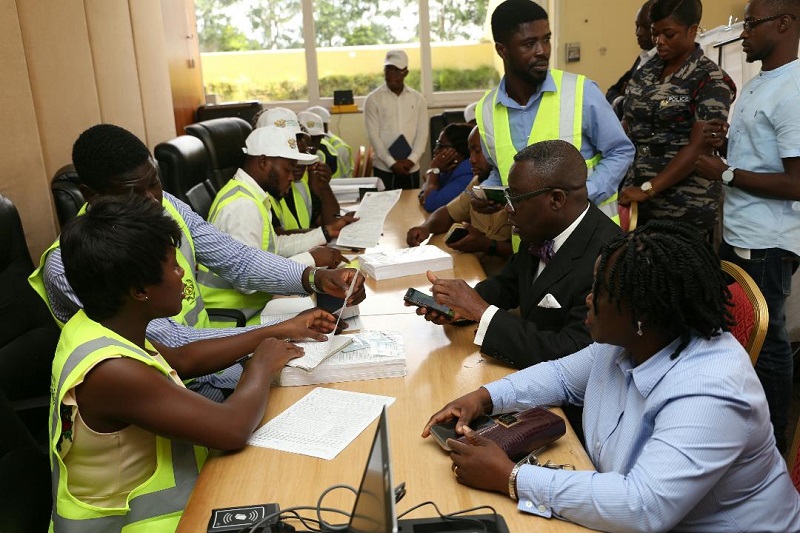 The National Identification Authority (NIA) has successfully registered a total of 102,554 people in the first week of its national mass registration exercise.

It  has also successfully issued instant cards to most registrants.

According to the NIA, it successfully captured the details of 7,900 people on the first day of registration with the number shooting up to 19,364 on the second day.

The number went up further to 24,765  and 26,764 registered people on day three and four  respectively of the exercise.

It, however, took a nosedive when 23,761 people went through the process on the fifth day.

But checks at various stations around the Achimota-Abofu communities within the Okaikwei North Constituency show that there were still niggling challenges bedeviling the mass registration process.

All centres visited by The Finder on Monday recorded issues of poor network connectivity delaying the registration process  with the registrants been told to return for their cards at a later date.

Many of them complained about the slow nature of the process despite arriving early in the morning  but have not yet received their cards as at 3pm.

At the Abofu Presby School 1, the Chief Registration Officer (CRO) told the Finder that the major problem they faced in the first week of registration  was with network connectivity – a situation which slowed the registration process on several occasions.

He said,their work had to be shifted to  the night, a time that he the connectivity was strongest to print the cards.

This situation, he explained,  led to the registration officers sleeping over at the centre.

When asked whether any special security arrangements had been made for the night crew, he said the community members had mobilised to take care of their security.

He also disclosed that he had designated a registration officer to take care of the needs of the elderly, pregnant women and nursing mothers, as well as the physically challenged.

When The Finder queried him about the slow registration process, he explained that the process varies depending on network strength.

He revealed that the Presby registration centre had successfully captured and issued out cards to 53 people on the first day, 74 people on the second day, 122 people on the third day, and 91 people each on the fourth and fifth days.

The CRO disclosed to The Finder that they would be moving their operations to another building on the same premises since the classrooms they currently occupy would be used by the pupils, who would be resuming today.

He explained that they would be allowed to occupy another building on the premises if they could provide the money for the prepaid credit.

He said that he could not tell if the money would be forthcoming.

He admitted that though the card-issuing process had been advertised as an instant one, this had not been the case in many instances due to the poor network connectivity.

Assistant Comptroller of Immigration (ACOI) Francis Palmdeti, who is the Head of Public Affairs of NIA, in responding to the issue of printing at night, clarified that it is part of the NIA’s strategy to register all Ghanaians, especially those in areas with connectivity problems, as well as places without electricity, so it had established ‘Printing Farms’, where mass printing of cards is done, for onward issuance to registrants at a later date.

Divine Healers Church
Network issues were again the story at the Divine Healers Church in Abofu, where the CRO was seen struggling to calm the mood of the visibly agitated youth who were complaining bitterly about the slow pace of the registration process.

One young man, Alhassan Yussif, who was very loud in his remonstrations, told The Finder that he and a group of friends who had come to the centre at 8am had only filled the first forms and made to wait while no one had given them any explanations.

In response, the CRO told The Finder that the instant card issuance process “depends on network availability”.

She told The Finder that 284 people had been registered since the process started a week ago.

ACOI Palmdeti, in response, explained that his outfit had made engagements with the Bureau of National Investigations (BNI) and other security agencies to ensure that adequate security arrangements are made to ensure the security of all NIA officials across all centres.

At the Achimota Primary School registration centre, the CRO declined to talk to The Finder, but then the registrants told this paper that the process had been a very languorous one.

According to them, the network had been unstable, leading to a stagnation of the registration process at certain times.

They also said that the process had been marred by power outages, and as the centre did not have a backup generator, they had no choice but to wait for the power to return.

On the issue of power outage and the locations of some centres that occupy public schools, ACOI Palmdeti indicated that it is the responsibility of the District Registration Officer (DRO) to ensure that issues of power outages and locations are resolved within the district.

He further said that monies are made available to the DROs to quell such issues, adding that “when officials raise such issues, it is the duty of the DRO to resolve it”.

At the Golf Hills Police Station, the CRO told The Finder that the process had been delayed by the insufficient number of iris scanners at their disposal.

Once again, the issue of network connectivity reared its head, and he said, “At night, network is better so we work three hours more to ensure that we capture all the details.”

He also admitted that the issuance of instant cards had not been easy as a result of the poor network strength in the neighbourhood.

He could not give the total number of registered applicants when asked. 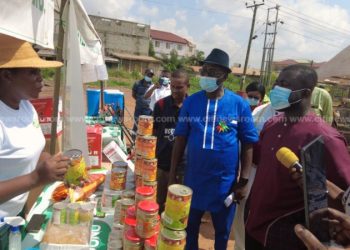