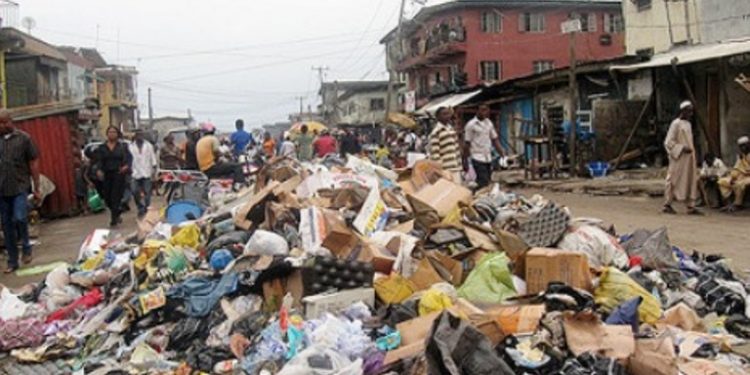 Ordinarily, markets are expected to be the cleanest spaces for the simple reason that that’s where foodstuffs are sold for human consumption.

Ironically, that is not the case for most markets in Ghana, especially, in the capital, Accra.

A report by the World Health Organization (WHO) in 2015 ranked Ghana the seventh dirtiest country in the world.

The report also said 7,500 children die annually in Ghana from diarrhoea that is linked to unsafe drinking water and poor sanitation.

The Agbogbloshie market is a vivid reflection of this picture as painted by the WHO.

It however seems that little is being done to salvage the situation despite the huge number of deaths recorded annually from sanitation-related ailments.

One way to start is to pay attention to sanitation in our markets.

The Agbobloshie market, argued by many to be the biggest market located in the capital, Accra often greets buyers, sellers and tourists with heaps of rubbish, deteriorated roads and choked gutters.

Market women who trade at Agbobloshie have over the period lamented over the state of the market, calling on the responsible agencies to do the needful. These agencies have however not heeded any of the complaints by the traders.

Interacting with these market women as well as buyers, it was clear that the situation is obviously affecting their businesses, and this is in spite of the health implications. Apart from the choked gutters and heaps of refuse along the road, the market bears a heap of rubbish, which, according to the traders, is collected once a month. The refuse, however, appears to have been uncollected for months.

“The management of refuse in this area is poor. When they sweep, they dump the refuse at the station. No one transfers it to another location. Now the refuse has heaped. When finally, a vehicle comes to transfer it, we are unable to stand the stench,” a market woman told me.

Another one lamented, “the issue with the refuse really disturbs us. Because of it, when it rains, people do not buy. They should work on it because we cannot fathom the situation. Did you see the refuse by the roadside, how will people come in to buy? We pay tolls; all that money should be used to salvage the situation. Government should act swiftly. For us who sell vegetables, the situation is really bad.”

The heap of rubbish is not the only sickening situation the market women face on a daily basis. They complain about the deteriorating nature of the road that transports food items to and from the market.

“They have to fix the road for us. Anytime it’s elections time, they find their way here; but after the election, they come no more. This market is the destination for most of the foodstuffs before it gets to other markets,” a market woman said to me.

Another one bemoaned that “they do not fix the roads properly. Just after it is repaired, it goes back to its old state. If the road is in a deplorable state, how will they come into the market to buy?  They should take a second look at Agbogbloshie. This is where we make ends meet for ourselves and our families.”

Traders, buyers and drivers who utilize the Agbogbloshie market are calling on the responsible agencies to swiftly ensure that the market has the facelift that is befitting of its status.

This report was filed by Bervelyn Longdon, a National Service person with Citi FM and Citi TV