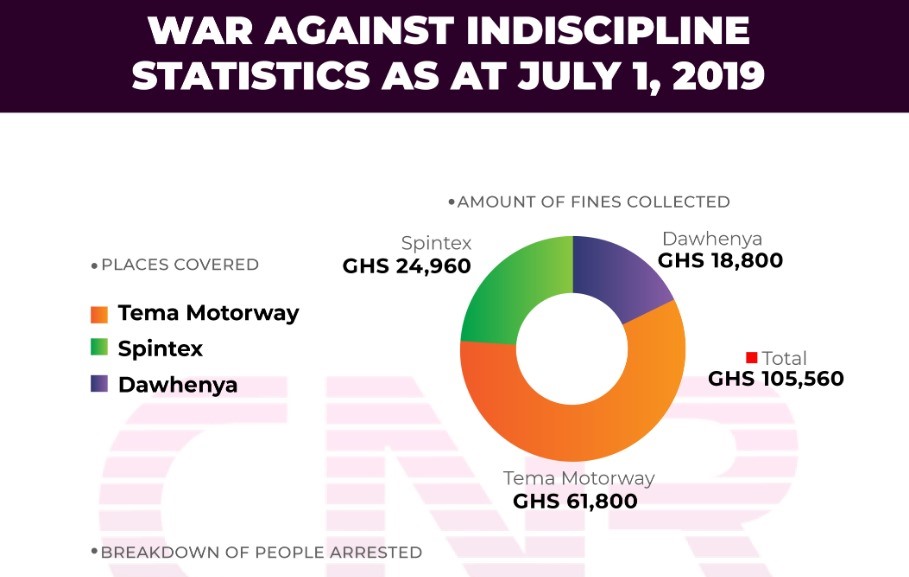 The campaign, which has received massive support from the police service, has seen close to 200 drivers arrested and put before court for various traffic offences.

The highest amount collected from the three places covered was at the Accra-Tema Motorway with GHc 61,800.

The Citi TV campaign is aimed at averting the increasing loss of lives through road carnage due to recklessness and general disregard for traffic regulations.

The first leg of the campaign started with the naming and shaming of drivers who breached traffic regulations including the abuse of sirens.

The second leg started on June 17, 2019, when the Citi TV team hit the streets with the police to arrest errant drivers on the Accra-Tema Motorway, most of whom were either making illegal U-turns or driving on the shoulders of the road.

Over 40 drivers were arrested on that day and processed for court.

Politicians, musicians, doctors, lawyers among others have all been nabbed through the campaign for breaking traffic rules.

On the Accra-Tema Motorway, 95 drivers were arrested with 93 of them prosecuted and fined.

69 recalcitrant road users were apprehended on the Spintex Road Out of this number, 53 of them have been prosecuted with charges pressed against 48.

The Dawhenya road recorded 29 arrests and prosecutions as well as 24 of them facing fine.

Among the errant drivers nabbed are the Deputy Managing of the Bulk Oil Distribution and Transport Company (BOST) Moses Asem and the driver of the Member of Parliament for Kade, Kwabena Ohemeng-Tinyese.

The War Against Indiscipline campaign is a Citi TV initiative supported by Citi FM.

The Police Service has partnered the sister stations to forestall sanity on the roads.

The campaign is likely to hit a road near you and your failure to abide by the road traffic code will see you slapped with court fines.

Your description of Universities Bill critics ‘unfortunate’ – UTAG to Akufo-Addo