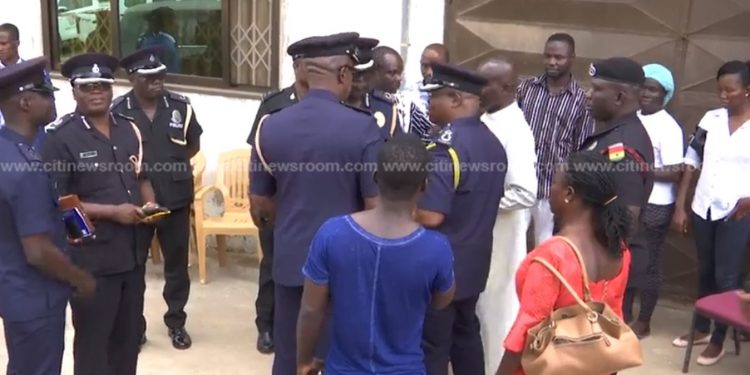 The Director of Police Public Affairs, ACP David Eklu says the Police Service is currently reviewing a disciplinary report on the four police officers who were on duty when accused kidnapper, Sam Udoetuk Wills, escaped from his cell, for necessary actions to be taken.

ACP Eklu who said the report has been with the Police Headquarters since July was speaking at the Western Regional Police Command in Sekondi after he joined the acting IGP to visit the four families of the Takoradi kidnapped girls on Tuesday.

His comments follow incessant demands by families of the kidnapped girls for the police service to come clean on the punishment for the officers who were on duty during the suspect’s escape from the cell.

“The service enquiry procedures have been completed and the report has been sent to the office of the Inspector General of Police for the review of the central disciplinary board. When issues like this happen, there is an officer who is assigned to inquire about the case and to make recommendations to the Police Headquarters where we have a Board made up of Police Commissioners who will review the findings of that officer. That report was sent in July and I believe that pretty soon, the review board will either confirm the recommendations from the adjudication officer or request another inquiry. So that process is almost done,” he noted.

The suspect in the kidnapping of three girls in Takoradi in February revealed that a police investigator helped him break jail when he was re-arrested.

The Western Regional Police Command subsequently set up a committee to investigate these claims where some police were found culpable for being on duty when the jailbreak occurred.

The suspect was jailed based on two charges of escaping lawful custody and destroying property as the prosecution could not prove the third charge of resisting arrest.