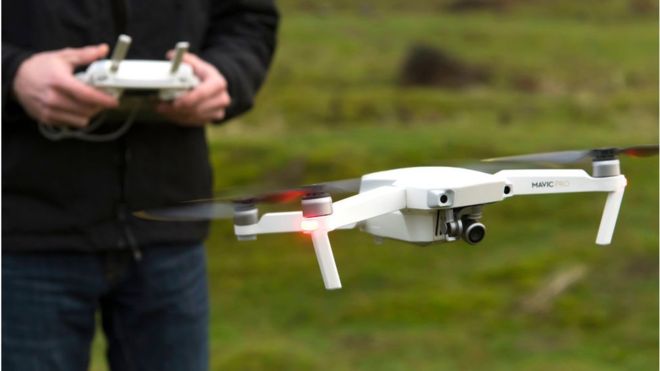 UK drone pilots must register their details with the Civil Aviation Authority (CAA) by the end of 29 November or face a fine of £1,000.

Anyone responsible for a drone which weighs more than 250g (8.8oz) must register it with the regulator online.

The drone operator must be over 18 and pay a £9 annual fee.

The CAA estimates that there are 130,000 drone users in Britain, but so far only around 50,000 people have registered.

Anyone of any age can still fly a drone if they complete a free 20 question multiple-choice quiz online and the drone is registered with an adult.

In December 2018, drone sightings on the runways at Gatwick Airport caused havoc for thousands of Christmas travellers.

The disruption caused about 1,000 flights to be cancelled or diverted over a 36-hour-period.

Simon Smith, a pilot instructor at the Phantom Flight School in Maidstone, Kent, told the BBC that the new regulations could help keep the skies safe, but only in conjunction with better technologies.

DJI, the largest consumer drone maker in the world, recently demonstrated a new protocol that enables people to use smartphones to identify nearby drones and pinpoint where their pilots are located.

“Hand-in-hand with regulations will come technology, as drones are automatically broadcasting details of where they are, who’s flying them, where the pilot is located,” said Mr. Smith.

“Stuff like that will inevitably improve the situation. We’ve got to share the air safely and in order to do that, everybody has got to know where everybody else is.”

Apart from facing a hefty fine, people with unregistered drones also potentially face criminal charges if they fly them illegally or negligently, according to the police.

The National Police Chiefs’ Council lead for the criminal use of drones, Deputy Assistant Commissioner Lucy D’Orsi, said: “We have plans in place to protect the public and we will pursue, investigate and prosecute anyone who uses a drone illegally or in a dangerous way that puts people at risk.”

In October, retailer John Lewis said it had stopped selling drones in May amid concerns they were being misused by the general public.

Amazon: What does 'peak season' mean for employees?