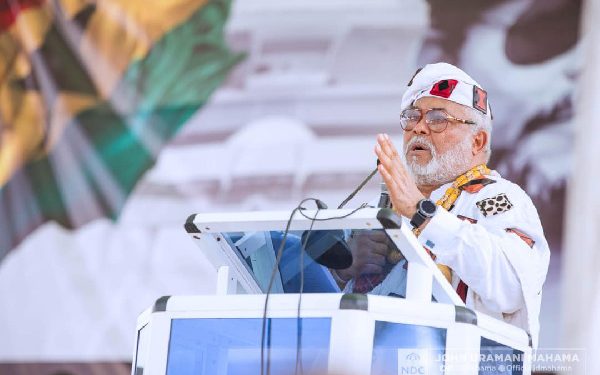 Former President Jerry John Rawlings has added his voice to calls for relevant authorities to ensure that Reverend Professor Afful-Broni is made to step aside as Vice Chancellor of the University of Education, Winneba (UEW), while he’s being investigated over the issue at stake.

He said this will ensure that justice is fairly carried out to all aggrieved parties and also ensure lasting peace in school.

“I commend the government for their prompt intervention by laying a roadmap for the peaceful resolution of the matter after I expressed my initial concerns. From the records of EOCO and other state agencies the affected individuals were exonerated as there was no evidence of misconduct established against them. Ironically, the current Vice Chancellor, who was indicted in the same report, still remains at post,” he stated.

The former President made this remarks at Winneba in the Central Region, when he addressed a durbar to climax the 38th anniversary of the 31st December revolution.

He said despite efforts by the government to resolve the matter, it appears to him there has not been any significant progress in over three months.

“More than 20 dismissed staff at the UEW are going through discontent and pain. I hope this important matter is given the urgency and attention that is required,” he stated.

He emphasized that in view of the ongoing investigations involving Professor Afful-Broni, it is just appropriate and fair that he is caused to step aside pending the conclusion of the investigations.

“I understand there are investigations ongoing regarding the current Vice Chancellor. It will be appropriate for the Council to request that he steps aside for fairness to prevail as has been the practice with other similar circumstances in the past,” Mr. Rawlings further stated.

A former Vice-Chancellor of the UEW, Professor Avoke, was controversially dismissed by the University Council after allegations of financial mismanagement were raised against him by some staff of the University.

This led to a probe by the Economic and Organized Crime Office (EOCO) and the National Security into the matter. A joint report by these two state institutions has exonerated Prof. Avoke of any wrong doing.

Irrespective of this, the Council of the University has refused to reinstate him and others affected by the allegations.