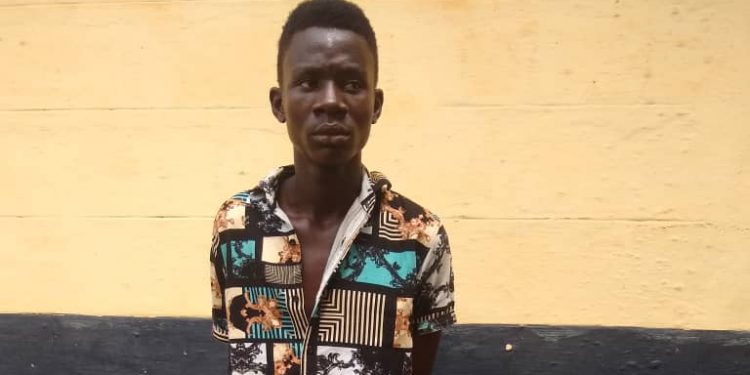 Police at Akim Oda in the Eastern Region have arrested a 19-year-old suspect over the kidnapping of a nine-year-old boy.

The suspect, Ebenezer Oko, a dropout of Atweaman SHS in Akim Manso, was arrested on Tuesday, February 17, 2020, near the shop of a Mobile Money merchant in the Jamaica suburb of Akim Oda.

The suspect was on his way to withdraw money sent to his Mobile Money account by the police to lure him out of his hideout.

The victim was kidnapped on his way home during a town harvest, police records said.

The victim, who has since been rescued, recounted that Ebenezer Oko accosted him on his way from a toilet on the outskirts of the town.

Ebenezer Oko said he was new to the town and asked the boy to lead him to Akim Manso, a neighbouring town.

From Akim Manso, the suspect took the victim to Akim Asene, the next town, and then to Akim Oda, where they slept in a hotel until the following day.

It was at this point where the suspect made contact with the victim’s mother.

The victim’s mother, Mary Baah, had earlier reported to police that her other son came home and informed her that while on his way home, he saw his younger brother walking with a man in town.

The victim reportedly ignored his brother’s appeals to go home.

According to her, she received an anonymous call from a man informing her that he had kidnapped her son.

He said he was keeping her son in an unknown location and demanded GHS 5,000.00 before he would release the child.

She, in turn, told him she did not have money following which the suspect asked for GHS 50.

The victim’s mother sent the GHS 50 but the child was not released.

Use the law, not violence in opposition to new register - Opuni cautions

Use the law, not violence in opposition to new register - Opuni cautions