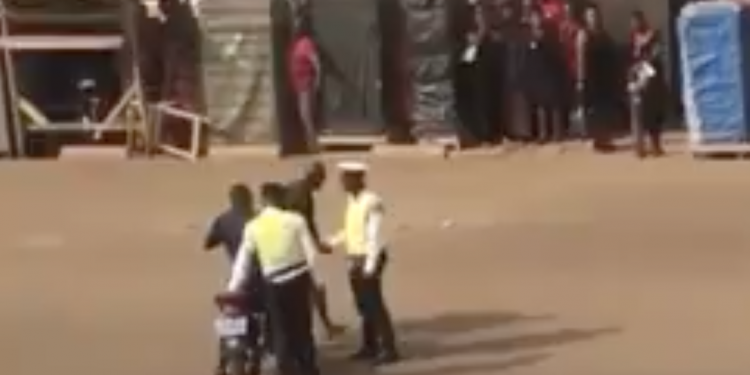 Some police officers with the Bono Regional Police Command are being questioned over their alleged involvement in the manhandling of some residents in Sunyani.

The residents were allegedly beaten for failing to adhere to a directive by the Sunyani Traditional Council to wear black or red attire to signify the mourning of a queen mother, Nana Yaa Nyamaa Poduo II.

In viral videos circulating on social media, the ‘abrafuors’, as well as uniformed Motor Transport and Traffic Department (MTTD) officers, were seen hitting residents who were not in the preferred attire.  This sparked public outrage.

In a Citi News interview, the Regional Crime Officer, Chief Superintendent Nana Kweku Duah said although no arrests have been made, investigations are ongoing.

“The police met in bulk and we have been able to identify them [the assaulters] today. So they are here with me and their statements are being taken. Investigations have just begun. If you watch the video very well, you’ll see that the abrafour were the people who initially started the assault and the policemen who were on duty who were supposed to have rescued the man rather joined the abrafour in assaulting the man. Apart from the policemen, nobody has been picked up. We have not identified the victim yet and he has also not brought any report to the police so we are still looking for him,” he said.

Earlier on Wednesday, reports from the area indicated that residents in the municipality were assaulted for not being clothed in red or black attire, to signify the mourning of a queen mother, Nana Yaa Nyamaa Poduo II.

The Sunyani Traditional Council who has however faced criticism after the video went viral, has denied ordering the abrafour to beat residents who flouted customs during the funeral rites of the queen mother.

A representative of the Sunyanihene, Kofi Adom Manu, admitted that “certain things went wrong but not [to the extent] of what you have been seeing.”

“The Omanhene and the Abrafour are educated people and have been taught how to maintain order and how to do things. From the onset, we experienced a lot of miscreants,” he added.

On the back of this, a Security Analyst, Adam Bonaa, has called on the Inspector-General of Police and the Interior Minister to order the immediate arrest of all the police officers connected to the assault of the Sunyani residents.

He described the actions of the police as a major indictment on their image.