Calm returns to Sogakope after protest over murder of Assemblyman 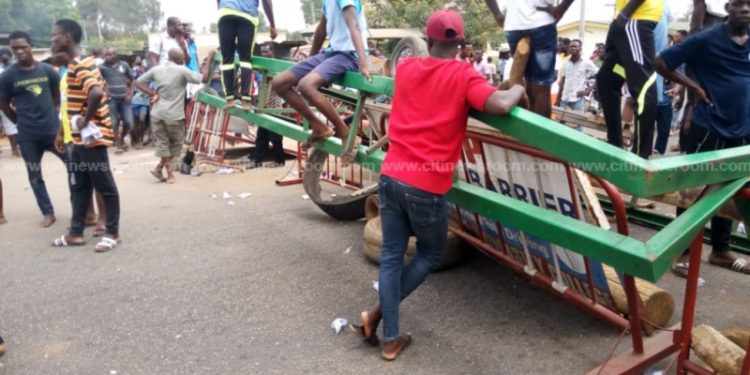 Calm has returned to Sogakope in the Volta Region following the gruesome murder of an assembly member, Marcus Mawutor Adzahli.

Marcus, who doubled as a mobile money vendor, was found dead after sporadic gunshots were heard at his residence on Sunday, March 1, 2020.

His killing forced residents to block roads to protest violent crimes and the seeming failure of the police to intervene.

The blockade caused gridlock in the area, leaving many travellers stranded.

But the District Chief Executive, (DCE) for the South Tongu District, Emmanuel Luis Agama, has assured aggrieved residents of Sogakope of his commitment to getting the security issues in the area brought under control.

As of the time of Citi News‘ visit to the area on Sunday, there were no police officials at the scene but the DCE said the District Security Council will meet over the issue and find solutions.

“When issues of this nature happen, we hold a DISEC meeting to have briefings from the security chiefs. We need more police officers in the district. I will meet them so that we take up any grievances they have.”

Gunshots were heard around 1:00 am at the residence of Marcus Mawutor Adzahli on Sunday, March 1, 2020.

Marcus reportedly struggled with eight robbers who were armed with guns and clubs. He was subsequently stabbed and shot multiple times, according to reports.

No arrest has so far been made.

Meanwhile, the remains of the deceased, also known as Mac-Greenline, has been deposited at the South Tongu district hospital morgue in Sogakope, pending an autopsy.

A resident of the area, Maxwell Lukutor, said this was the latest in series of violent crimes, seemingly without any urgency shown by the police to address the issues.

“The issue is that our security is compromised. We have had several attacks, whether from armed robbers and we see a lot of inaction from the police.”

The Sogakope district police commander, DSP Michael Zah, said his outfit was trying to calm tensions and pave way for the road to be opened.

He also defended the level of security provided by his men in the area.

“Security is not as porous as they [the protesters] are saying. It is a challenging issue which we need to sit with the youth and sort out.”