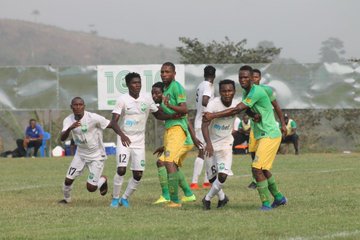 While Aduana Stars and Liberty Professionals both recorded narrow 1-0 victories, Ashantigold suffered quite possibly their worst defeat in the history of the league at WAFA.

WAFA gave AshGold a 6-1 mauling on Sunday in Week 12 of the Ghana Premier League. The home side produced their best football performance of the season to hand the Miners a reality check and a bitter pill to swallow.

Sharif Mambo’s men went into the game top of the league table and when Amos Kofi Nkrumah canceled out Konadu Yiadom’s opener, it appeared Ashantigold were up for a battled. Even when the first half ended 2-1 to Prosper Nartey’s academy boys, it still looked like Ashantigold had it in them to stage a fight back.

But they completely collapsed in the second half, conceding 4 more goals in just 45 minutes. Andrews Ntim, Ibrahim Abubakari, Daniel Owusu and Haruna Mola all got on the score sheet to add to Konadu Yiadom’s brace.

The Miners thus lose their top spot and slip down to 4th on the league table.

Aduana Stars reclaimed top spot in the Ghana Premier League with a narrow 1-0 win away at Dreams FC. The game was new head coach Paa Kwasi Fabin’s first game in charge of the defending champions and he could not have asked for a better start to life.

Following a goalless first half, right back Isaac Kwain powered a low drive free-kick that squirmed under the Dreams goalkeeper on its way in to give Aduana Stars a 1-0 win at Dreams FC on Saturday with his first goal for the Fire Boys.

Liberty Professionals returned to winning ways with a 1-0 success over Karela United to move up to 10th on the league table.

Playing at the Karl Reindorf Park in Dansoman for only the second time since the ban on ground was lifted, Elvis Kyei Baffour’s goal was the difference between the two sides on the day.

Kyei Baffour has now scored 7 goals for the season.

Up next for the Betway trio includes a big Betway Derby in Dormaa: