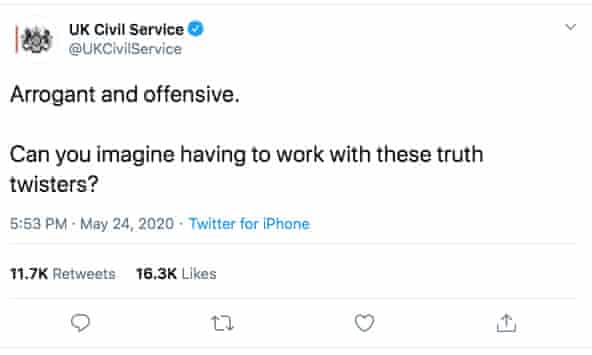 It was a sentiment perhaps shared by at least some people who had watched Boris Johnson’s press conference, but not necessarily what you might expect from the official account of the civil service.

“Arrogant and offensive,” read the tweet from the @UKCivilService Twitter account, which has just over 250,000 followers. “Can you imagine having to work with these truth twisters?”

The tweet elaborated no further, but given that it was sent soon after Johnson had finished a sometimes extraordinary press briefing at which he had vigorously defended his under-fire chief aide, Dominic Cummings, the implication was fairly clear.

The Guardian view on Dominic Cummings: the unaccountable elite
Read more
A delighted Twitter shared the message tens of thousands of times before it was deleted, leaving the civil service account to its usual, more sober stream of messages about ways for businesses to cope with lockdown and other practical issues.

A government spokesman said: “An unauthorised tweet was posted on a government channel this evening. The post has been removed and we are investigating the matter.”

At the press conference, Johnson had dismissed criticism of Cummings’ decision to drive more than 260 miles to his parents’ estate in Durham with his wife and young son after his wife became ill, saying Cummings had been trying to keep his family safe.

“I think he followed the instincts of every father and every parent,” Johnson said. “And I do not mark him down for that.” The prime minister added: “I believe that in every respect he has acted responsibly, legally and with integrity, and with the overriding aim of stopping the spread of the virus and saving lives.”

News is under threat …
… just when we need it the most. Millions of readers around the world are flocking to the Guardian in search of honest, authoritative, fact-based reporting that can help them understand the biggest challenge we have faced in our lifetime. But at this crucial moment, news organisations are facing an unprecedented existential challenge. As businesses everywhere feel the pinch, the advertising revenue that has long helped sustain our journalism continues to plummet. We need your help to fill the gap.

We believe every one of us deserves equal access to quality news and measured explanation. So, unlike many others, we made a different choice: to keep Guardian journalism open for all, regardless of where they live or what they can afford to pay. This would not be possible without financial contributions from our readers, who now support our work from 180 countries around the world.

We have upheld our editorial independence in the face of the disintegration of traditional media – with social platforms giving rise to misinformation, the seemingly unstoppable rise of big tech and independent voices being squashed by commercial ownership. The Guardian’s independence means we can set our own agenda and voice our own opinions. Our journalism is free from commercial and political bias – never influenced by billionaire owners or shareholders. This makes us different. It means we can challenge the powerful without fear and give a voice to those less heard.

Reader financial support has meant we can keep investigating, disentangling and interrogating. It has protected our independence, which has never been so critical. We are so grateful.

We need your support so we can keep delivering quality journalism that’s open and independent. And that is here for the long term. Every reader contribution, however big or small, is so valuable. Support the Guardian from as little as $1 – and it only takes a minute. Thank you.