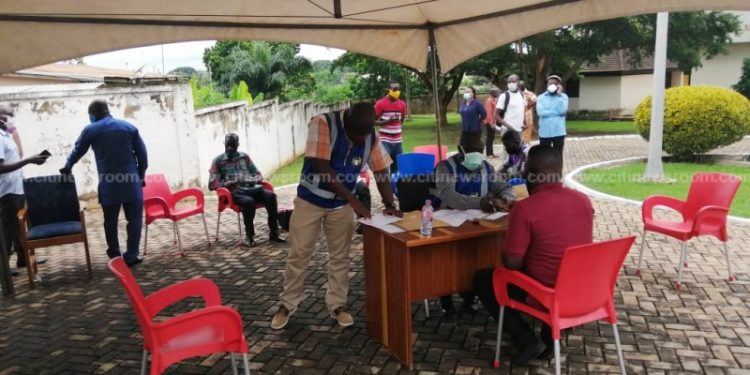 “At the end of the two-day exercise, a total of 1,990 applicants were registered, with 745 applicants registered on Day One and 1,245 on Day Two,” the Commission noted in a statement.

The Commission further acknowledged that “the exercise went on smoothly at all the designated centres, except in the Western Region where the BVR Kit developed a fault on the second day. This led to the suspension of the exercise in the Western region but afforded the Commission the opportunity to test its inbuilt processes of dealing with equipment breakdowns during the registration process.”

In as much as there were many challenges associated with the exercise, the EC has pledged to critically focus on the shortfalls in order to come out with the best of everything when the actual work begins.

“This metric is expected to only get better. We are to register over 100 registered applicants per kit per day, as was attained by some regions during the pilot. At that level of performance and with the continued enthusiastic participation of the Ghanaian public, the Commission is confident of registering some 13 million-plus applicants within the first 21 days of the mass registration exercise.”

After all evaluations with the pilot exercise, the EC says that it is “very satisfied with the exercise and will use the lessons learnt to improve upon the conduct of the upcoming Voter Registration Exercise.”

The National Democratic Congress (NDC) which has been in opposition to the decision to compile a new electoral roll found many issues with the pilot exercise, which according to them, serves as evidence to be used to support their arguments.

In the Ashanti Region, the Secretary for the NDC, Kwame Zu raised concerns with the fact that most of the persons taking part in the pilot exercise in his area were EC officers.

“It is a controlled atmosphere that may not be representative of a typical registration atmosphere,” he noted.

The NDC Volta Regional Vice Chairman, George Loh, who participated in the registration at the EC’s office in Ho, pointed out that in the long run, the NDC now had the proof they needed to further challenge the Electoral Commission, as he found many faults with the whole process.

“I spent close to 20 minutes even going through the process that was bad. In the middle of the process, they had to carry the tables and everything because rains were coming. they were talking about facial recognition which we didn’t see. They were not even forthcoming with answers to questions. You ask a question and they don’t want to talk because I believe they’ve been instructed not to answer pertinent questions.”

He continued, “For me, the important thing is that the exercise is a confirmation of our stance as NDC that we are on the right track in opposing a totally new register. Because from what I went through, even the 700,000 that we anticipate to happen in the limited registration would be a problem, let alone 18 million Ghanaians that would have to be registered, coupled with people not having a Ghana card and passport. When I went, I deliberately said I didn’t have any NIA card or passport. So now they had to look for people to come and vouch for me and that process in itself took some time and it was problematic. So clearly, we are saying that we have been vindicated.”

Some NDC officials in the Western Region also expressed shock over the Commission’s suspension of the pilot registration in the region on the final day of the exercise.

The Regional Communications Director, Kirk Mensah, told Citi News that they were surprised to learn that the exercise has been suspended in the region due to challenges with the BVR machines.

Meanwhile, the Member of Parliament for the Mpraeso Constituency, Seth Kwame Acheampong has indicated that the challenges encountered during the pilot exercise will enable the Electoral Commission to prepare adequately for the main registration.

Read the EC’s full statement below: 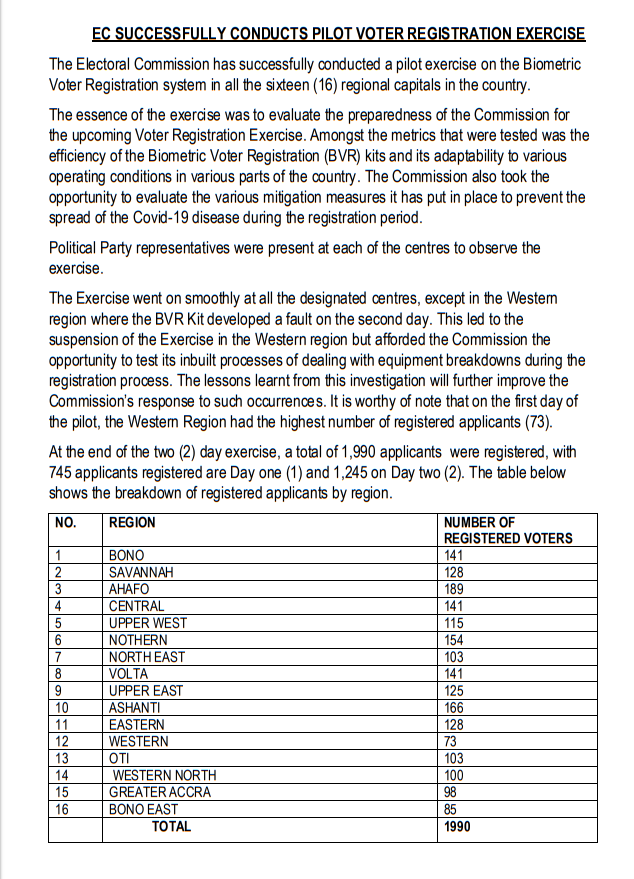