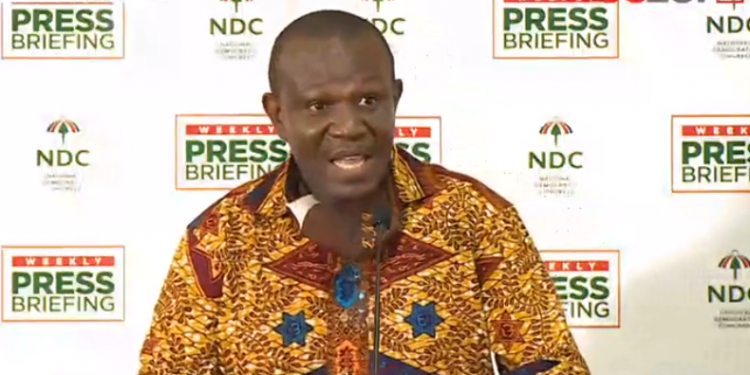 The Volta caucus on the Minority side in Parliament has given the government a 24-hour ultimatum to withdraw the security personnel from Ghana’s borders in the Volta Region.

The Chairman of the Volta Caucus, Emmanuel Bedzrah, who spoke at the NDC’s bi-weekly press briefing said: “The fire has been laid, and we the Voltarians are ready. We are not cowards and I want to repeat that, we are not cowards.”

According to the Caucus, the deployment is an attempt to intimidate residents of the Volta Region in the upcoming voters’ registration exercise.

He made the call on the backdrop of the deployment of military personnel to some parts of the country.

Meanwhile, the government has explained that the deployment is to secure Ghana’s borders because of COVID-19 and the illegal entry of foreigners into the country.

Deployment of security personnel an agenda to intimidate registrants — Mahama

The flag bearer of the opposition National Democratic Congress (NDC), John Dramani Mahama, has said the deployment of security personnel by the government is an agenda to intimidate residents from coming out in their numbers to register.

“Reports have filtered in of a massive deployment of Military and other security personnel in the Volta, Oti, Upper East, and Upper West Regions. The unexplained security deployments to these border regions have clearly been timed to coincide with the commencement of the Voter Registration exercise across the country.”

“These deployments have begun to create panic and anxiety among residents of the various regions who have been left in no doubt that it has been done as part of a larger strategy to intimidate them into abstaining from the registration exercise starting next Tuesday.”