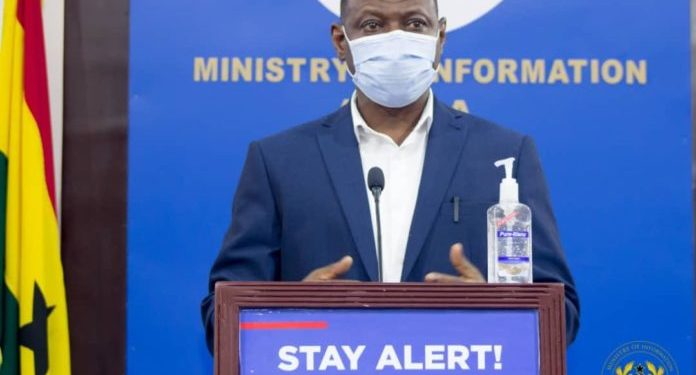 The Ghana Health Service (GHS) has admitted to the use of Zinc and Zithromax as a treatment for persons infected with COVID-19.

Director-General of the Ghana Health Service said the drug is proving to be one of the most effective medications for managing persons with the virus.

He also noted that health authorities are awaiting approval of one more drug which is Hydroxychloroquine.

Dr. Kuma-Aboagye made this known during the bi-weekly update on COVID-19 case management organised by the Ministry of Information on Tuesday, July 28, 2020.

“Very soon, our results will come out for us to know whether the people on Zithromax and those who are on Hydroxy Chloroquine alone will be the outcome. I think that will be very helpful. What we also know is that Zinc helps to protect the mucosal line. If it is weak, it is easier for a virus to enter. So it has some protection of the lining of the mouth, the nose that does not have easy access to the virus. That is why we do that and add vitamin C. Zithromax also provides secondary protection because it is antibacterial, so if you have some antibacterial infection, it offers some protection. But the hydro chloroquine, when the results come, we will see whether it works for us for a decision to be taken.”

Zithromax is an antibiotic that fights bacteria.

It is used to treat many different types of infections caused by bacteria, such as respiratory infections, skin infections, ear infections, and sexually transmitted diseases.

782 new cases have also been recorded from 58 districts in seven regions across the country pushing the cumulative cases to 34,406.

These are from samples that were taken from the period June 23 to July 25 but reported from the lab on July 26.

The number of active cases is also 3,617. The country’s total death toll stands at 168.

Out of the 782 new cases, 428 of them were recorded in 25 districts in the Greater Accra majority of the cases are from the Ayawaso West, Accra Metro and Korle Klottey areas.

The Ashanti Region followed with 319 new cases in 21 districts including the Kumasi Metro and Sekyere South.

Five districts in the Bono East Region have recorded 21 new cases majority being in Sene West, Kintampo North and Techiman.

In the Western Region, seven new cases in three districts were recorded in areas like Wassa Amenfi West.

The Bono Region has five new cases in three districts.

Only one new case has been recorded in Kajebi in the Oti Region and Tamale in the Northern Region.

Still leading the chart in terms of regional cases is the Greater Accra Region with 2,459 active cases.