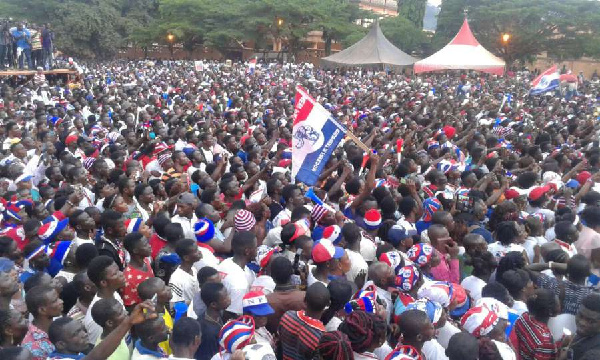 Preparations are underway for the manifesto launch of the governing New Patriotic Party (NPP) in the Central Regional capital, Cape Coast.

The NPP is tomorrow, Saturday, August 22, 2020, launching its manifesto ahead of the December 2020 polls.

Citi News‘ Central regional correspondent, Calvis Tetteh reports enough preparations have been made ahead of the event.

He said there is heavy vehicular traffic in some parts of the region.

The venue- the University of Cape Coast has also been decorated with party billboards and paraphernalia.

NPP’s 2020 manifesto seeks to update electorates on achievements of its 2016 manifesto and projections for the next four years should the party be retained in government.

Deputy Campaign Manager for the party, Mustapha Hamid who spoke to Citi News about the event indicated that the launch will be in accordance with the COVID-19 safety protocols.

“We have been in office for four years. Therefore you expect that we will bring you a manifesto that basically updates you on our 2016 manifesto. The manifesto will be in two parts. One part will account for our record in office for the last four years.

“The other part will give you a sense of our new direction we want to take our country to. It is strictly by invitation and even not all those in the NPP will be allowed. It is basically a roll call and therefore all the COVID-19 safety protocols will be adhered to.”

The manifesto launch will be hosted virtually due to the Coronavirus pandemic.

Invitations have however been given to a select few, according to a press release signed by the NPP General Secretary, John Boadu.

Zoom platforms have also been created for all other party members across the nation to virtually join the launch.

“For persons other than members of the party’s National Council who wish to participate in the event to join the feed, such persons are encouraged to converge at the various regional offices of the party where the proceedings will be projected on large screens,” the statement said.

The Vice President, Mahamudu Bawumia and other experts drafted the 2020 manifesto.

The team hopes that the policies outlined in the manifesto will make Ghanaians retain the Akufo-Addo administration in office for another four years.

The party recently inaugurated a nine-member planning committee for the launch of the manifesto.