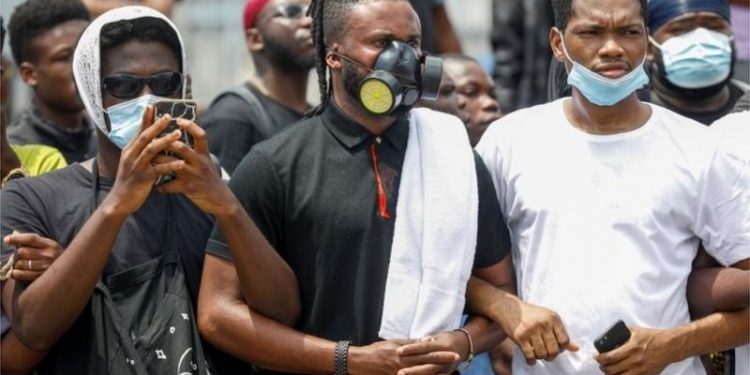 Nigeria’s police chief has ordered the unconditional release of all demonstrators arrested during protests against police brutality.

This was a key demand of protesters who have rallied against the hated Special Anti-Robbery Squad (Sars) in major cities for seven days.

Amnesty International said that 10 people were killed in the protests.

Rallies have continued despite President Muhammadu Buhari announcing on Sunday the disbandment of Sars.

Protesters responded to that announcement with scepticism, saying they believed that Sars officers were still deployed.

Some of Nigeria’s biggest music stars, including Davido and Falz, threw their weight behind the demonstrators, who have been galvanising support on Twitter under the #EndSARS hashtag.

On Tuesday, they marched in the oil hub of Port Harcourt in defiance of a ban on demonstrations imposed by the state governor.

Protests were also held in the commercial hub, Lagos, the country’s capital, Abuja, and four other cities.

What did the police chief say?

Mohammed Adamu announced the release of all protesters at a meeting with the National Human Rights Commission.

He did not say how many of them were in detention.

Mr Adamu added Nigerians had the right to protest peacefully and ordered officers to stop using force against them. He acknowledged that the protesters’ concerns were genuine and said they would be addressed by the government.

The meeting also agreed that an independent panel would be set up to investigate allegations of abuse against Sars, and other police units.

On Monday, Mr Buhari promised that the disbandment of Sars was only the first step towards “extensive” reforms within the police force.