The Institute for Education Studies (IFEST) has described as misplaced, the ongoing debate over who introduced the Free Senior High School Policy.

The candidate for the New Patriotic Party (NPP), President Akufo-Addo, and the flagbearer of the National Democratic Congress (NDC), John Dramani Mahama have clashed on the campaign trail this week over who introduced the policy.

But the Executive Director of the Institute, Peter Anti in a Citi News interview said the fundamental question that ought to be answered by the two candidates is what constitutes Free SHS.

“This debate is a misplaced one. What is the definition of free SHS according to these two political parties? The fact is in 2015, the then president, John Dramani Mahama announced ‘a free SHS programme’. The focus of his programme was to pay a subsidy of GHS48 to GHS54 to day students. They also started the construction of classroom blocks to ease the pressure on schools to accommodate the number of students that were expected to be enrolled because of their free SHS. So to them, they started what they call a progressively free SHS.”

“Now the current President in 2017, Nana Akufo- Addo, also announced another policy they called ‘Free SHS.’ Note that they did not say they were going to continue the free SHS programme purported to have been started by the NDC. They started another free SHS programme. They had another implementation programme. They said all students entering the secondary school from the first year, will not have any financial obligations to the Ghana Education Service,” he noted.

The debate between the NDC and NPP over who introduced the free SHS policy was sparked by John Mahama on Tuesday, November 24, 2020, during his three-day campaign tour of the Upper East Region.

Mr Mahama told the people of Tuobong, a community in the Tempane District of the region that the free SHS programme was started by his government in 2015.

President Akufo-Addo in response to this expressed shock at the claims by the NDC flagbearer.

Some members of the NPP have also responded to Mahama’s claim. 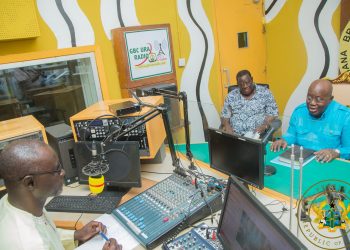